The American woodcock (Scolopax minor), sometimes colloquially referred to as the timberdoodle, the bogsucker, the hokumpoke, and the Labrador twister, is a small shorebird species found primarily in the eastern half of North America. Woodcocks spend most of their time on the ground in brushy, young-forest habitats, where the birds' brown, black, and gray plumage provides excellent camouflage.

Because of the male woodcock's unique, beautiful courtship flights, the bird is welcomed as a harbinger of spring in northern areas. It is also a popular game bird, with about 540,000 killed annually by some 133,000 hunters in the U.S.

The American woodcock is the only species of woodcock inhabiting North America. Although classified with the sandpipers and shorebirds in Family Scolopacidae, the American woodcock lives mainly in upland settings. Its many folk names include timberdoodle, bogsucker, night partridge, brush snipe, hokumpoke, and becasse.

The population of the American woodcock has fallen by an average of slightly more than 1% annually since the 1960s. Most authorities attribute this decline to a loss of habitat caused by forest maturation and urban development.

In 2008 wildlife biologists and conservationists released an American Woodcock Conservation Plan presenting figures for the acreage of early successional habitat that must be created and maintained in the U.S. and Canada to stabilize the woodcock population at current levels, and to return it to 1970s densities.

The plumage is a cryptic mix of different shades of browns, grays, and black. The chest and sides vary from yellowish white to rich tans. The nape of the head is black, with three or four crossbars of deep buff or rufous. The feet and toes, which are small and weak, are brownish gray to reddish brown.

Woodcock have large eyes located high in the head, and their visual field is probably the largest of any bird, 360° in the horizontal plane and 180° in the vertical plane.

The woodcock uses its long prehensile bill to probe in the soil for food, mainly invertebrates and especially earthworms. A unique bone-and-muscle arrangement lets the bird open and close the tip of its upper bill, or mandible, while it is sunk in the ground. Both the underside of the upper mandible and the long tongue are rough-surfaced for grasping slippery prey.

Woodcock inhabit forested and mixed forest-agricultural-urban areas east of the 98th Meridian. Woodcock have been sighted as far north as York Factory, Manitoba, east to Labrador and Newfoundland. In winter, they migrate as far south as the Gulf Coast States and Mexico.

After migrating south in autumn, most woodcock spend the winter in the Gulf Coast and southeastern Atlantic Coast states. Some may remain as far north as southern Maryland, eastern Virginia, and southern New Jersey. The core of the wintering range centers on Louisiana, Mississippi, Alabama, and Georgia. Based on the Christmas Bird Count results, winter concentrations are highest in the northern half of Alabama.

Woodcock eat mainly invertebrates, particularly earthworms (Oligochaeta). They do most of their feeding in places where the soil is moist. They forage by probing in soft soil in thickets, where they usually remain well-hidden from sight. Other items in the diet include insect larvae, snails, centipedes, millipedes, spiders, snipe flies, beetles, and ants. A small amount of plant food is eaten, mainly seeds. Woodcock are crepuscular, being most active at dawn and dusk.

Woodcock migrate at night. They fly at low altitudes, individually or in small, loose flocks. Flight speeds of migrating birds have been clocked at 16 to 28 miles per hour (26 to 45 kilometers per hour). However, the slowest flight speed ever recorded for a bird, 5 miles per hour (8 kilometers per hour), was recorded for this species. It is believed that woodcock orient visually using major physiographic features such as coastlines and broad river valleys. Both the autumn and spring migrations are leisurely compared with the swift, direct migrations of many passerine birds.

In the North, woodcock begin to shift southward before ice and snow seal off their ground-based food supply. Cold fronts may prompt heavy southerly flights in autumn. Most woodcock start to migrate in October, with the major push from mid-October to early November. Most individuals arrive on the wintering range by mid-December. The birds head north again in February. Most have returned to the northern breeding range by mid-March to mid-April.

Migrating birds' arrival at and departure from the breeding range is highly irregular. In Ohio, for example, the earliest birds are seen in February, but the bulk of the population does not arrive until March and April. Birds start to leave for winter by September, but some remain until mid-November.

In Spring, males occupy individual singing grounds, openings near brushy cover from which they call and perform display flights at dawn and dusk, and if the light levels are high enough on moonlit nights. The male's ground call is a short, buzzy peent. After sounding a series of ground calls, the male takes off and flies from 50 to 100 yards into the air. He descends, zigzagging and banking while singing a liquid, chirping song. This high spiralling flight produces a melodious twittering sound as air rushes through the male's outer primary wing feathers.

Males may continue with their courtship flights for as many as four months running – sometimes continuing even after females have already hatched their broods and left the nest.

Females, known as hens, are attracted to the males' displays. A hen will fly in and land on the ground near a singing male. The male courts the female by walking stiff-legged and with his wings stretched vertically, and by bobbing and bowing. A male may mate with several females. The male woodcock plays no role in selecting a nest site, incubating eggs, or rearing young. In the primary northern breeding range, the woodcock may be the earliest ground-nesting species to breed. 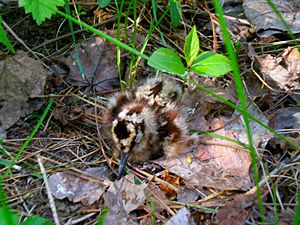 The hen makes a shallow, rudimentary nest on the ground in the leaf and twig litter, in brushy or young-forest cover usually within 150 yards (140 m) of a singing ground. Most hens lay four eggs, sometimes one to three. Incubation takes 20 to 22 days.

The down-covered young are precocial and leave the nest within a few hours of hatching. The female broods her young and feeds them. When threatened, the fledglings usually take cover and remain motionless, attempting to escape detection by relying on their cryptic coloration. Some observers suggest that frightened young may cling to the body of their mother, who will then take wing and carry the young to safety.

Woodcock fledglings begin probing for worms on their own a few days after hatching. They develop quickly and can make short flights after two weeks, can fly fairly well at three weeks, and are independent after about five weeks.

The maximum lifespan of adult American woodcock in the wild is 8 years.

It is not known how many woodcock were present in eastern North America before European settlement. Colonial agriculture, with its patchwork of family farms and open-range livestock grazing, probably supported healthy woodcock populations.

The woodcock population remained high during the early and mid-twentieth century, after many family farms were abandoned as people moved to urban areas, and cropfields and pastures grew up in brush. In recent decades, those formerly brushy acres have become middle-aged and older forest, where woodcock rarely venture, or they have been covered with buildings and other human developments. Because its population has been declining, the American woodcock is considered a "species of greatest conservation need" in many states, triggering research and habitat-creation efforts in an attempt to boost woodcock populations.

Population trends have been measured through springtime Breeding Bird Surveys and, in the northern breeding range, springtime singing-ground surveys. Data suggest that the woodcock population has fallen rangewide by an average of 1.1% yearly over the last four decades.

The American woodcock is not considered globally threatened by the IUCN. It is more tolerant of deforestation than other woodcocks and snipes; as long as some sheltered woodland remains for breeding, it can thrive even in regions that are mainly used for agriculture.

Creating young-forest habitat for American woodcock helps more than 50 other species of wildlife that need early successional habitat during part or all of their life cycles. These include relatively common animals such as white-tailed deer, snowshoe hare, moose, bobcat, wild turkey, and ruffed grouse, and animals whose populations have also declined in recent decades, such as the golden-winged warbler, whip-poor-will, willow flycatcher, indigo bunting, and New England cottontail.

Leslie Glasgow, the assistant Secretary of the Interior for Fish, Wildlife, Parks, and Marine Resources from 1969 to 1970, wrote a dissertation through Texas A&M University on the woodcock, with research based on his observations through the Louisiana State University Agricultural Experiment Station. He was an LSU professor from 1948 to 1980 and an authority on wildlife in the wetlands.

All content from Kiddle encyclopedia articles (including the article images and facts) can be freely used under Attribution-ShareAlike license, unless stated otherwise. Cite this article:
American woodcock Facts for Kids. Kiddle Encyclopedia.