The county was primarily settled due to its optimal location along the Raritan River and was established as of March 7, 1683 as part of the Province of East Jersey and was partitioned as of October 31, 1693 into the townships of Piscataway, Perth Amboy, and Woodbridge. Adjacent Somerset County was established on May 14, 1688, created from portions of Middlesex County. The county's first court met in June 1683 in Piscataway, and held session at alternating sites over the next century in Perth Amboy, Piscataway, and Woodbridge before relocating permanently to New Brunswick in 1778. Despite its status as a residential, commercial, and industrial stronghold and a centrally accessible transportation hub, Middlesex is also home to an extensive public park system with expansive greenways, totaling more than 6,300 acres (2,500 ha). Middlesex County is most demographically notable as the U.S. county with the highest concentration of Asian Indians, at nearly 20% in 2020, spanning the county's boundaries between Little India, Edison/Iselin in the north and Monroe Township at its southern tip.

Bisected by the Raritan River, the county is topographically typical of Central Jersey in that it is largely flat. The elevation ranges from sea level to 300 feet (91 m) above sea level on a hill scaled by Major Road/ Sand Hill Road near Route 1 in South Brunswick Township.

Middlesex County is prominently known for its significant concentration of Asian Indians. The growing Little India is a South Asian-focused commercial strip in Middlesex County, the U.S. county with the highest concentration of Asian Indians. The Oak Tree Road strip runs for about one-and-a-half miles through Edison and neighboring Iselin in Woodbridge Township, near the area's sprawling Chinatown and Koreatown, running along New Jersey Route 27. It is the largest and most diverse South Asian cultural hub in the United States. Monroe Township in Middlesex County has experienced a particularly rapid growth rate in its Indian American population, with an estimated 5,943 (13.6%) as of 2017, which was 23 times the 256 (0.9%) counted as of the 2000 Census; and Diwali is celebrated by the township as a Hindu holiday. Carteret's Punjabi Sikh community, variously estimated at upwards of 3,000, is the largest concentration of Sikhs in New Jersey. In Middlesex County, election ballots are printed in English, Spanish, Gujarati, Hindi, and Punjabi.

The county also includes some limited access highways and Interstates as well. Middlesex County hosts the southern end of the Middlesex Freeway (Interstate 287) which then turns into Route 440 that connects to the Outerbridge Crossing. The Garden State Parkway passes through the eastern edge of the county, which features nine interchanges and the northern start/end of the split-roadways (Express & Local Lanes). The New Jersey Turnpike carries Interstate 95 through the center of the county. The Turnpike has five interchanges in Middlesex County: Exit 12 in Carteret, Exit 11 in Woodbridge Township, Exit 10 in Edison, Exit 9 in East Brunswick and Exit 8A in Monroe Township.

The NJDOT is upgrading the Route 18 "avenue" to a freeway between the Route 1 interchange all the way up to the new 18 Extension in Piscataway Township.

The Turnpike Authority planned to build Route 92, which was to start near the intersection of Ridge Road & Route 1 in South Brunswick Township to Interchange 8A in Monroe Township. This plan was cancelled on December 1, 2006.

The southern end of the "dual-dual" configuration (inner car lanes and outer truck lanes) used to be one mile south of Interchange 8A at the border of Cranbury Township and Monroe Township. It was relocated to Exit 6 in Mansfield Township in Burlington County after the Turnpike widening project was completed in early November 2014.

New Jersey Transit provides Middlesex County with frequent commuter rail service along the North Jersey Coast Line, Northeast Corridor Line and Raritan Valley Line. The North Jersey Coast Line runs through the eastern part of the county. The Northeast Corridor Line runs through the northern and central part of the county. The Raritan Valley Line serves Dunellen and is accessible to other communities along the county's northern border with Union County and Somerset County .

Intercity rail service is also provided by Amtrak. The routes that runs through Middlesex County are the Acela Express, Keystone, Northeast Regional, and Vermonter services, although only the Keystone and Northeast Regional have regular stops within Middlesex County, at either New Brunswick or Metropark. Acela also occasionally stops at Metropark.

Bus service in Middlesex County is provided by New Jersey Transit, Coach USA's Suburban Transit, the extensive Rutgers Campus bus network, the MCAT shuttle system, and DASH buses. There are bus routes that serve all townships in the county, and studies are being conducted to create the New Brunswick Bus Rapid Transit system.

Municipalities in Middlesex County (with 2010 Census data for population, housing units and area in square miles) are: Other, unincorporated communities in the county are listed next to their parent municipality. Many of these areas are census-designated places that have been defined by the United States Census Bureau for enumeration purposes within a Township and for which 2010 population data is included in parentheses. 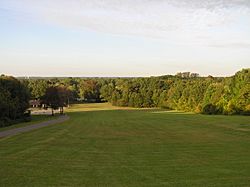 All content from Kiddle encyclopedia articles (including the article images and facts) can be freely used under Attribution-ShareAlike license, unless stated otherwise. Cite this article:
Middlesex County, New Jersey Facts for Kids. Kiddle Encyclopedia.