The original residents of Plainsboro were the Unami people, a subtribe of the Lenape Native Americans. In the 17th century, the Dutch settled the area for its agricultural properties.

The oldest developed section of Plainsboro is at the intersection of Dey and Plainsboro Roads. It is thought that the road was named after a Dutch-built tavern that sat at the intersection, called "The Planes Tavern," in the early 18th century or earlier. The building still stands and was featured on HGTV's If These Walls Could Talk along with the historic Plainsboro Inn building (circa 1790) that was built adjacent to "Planes Tavern" at Plainsboro Road and Dey Road.

In 1897, the Walker-Gordon Dairy Farm opened up, which, among many other things, contributed Elsie the Cow, possibly the most famous cow ever, and The Walker Gordon Diner, which has since been closed. The site of the farm has been turned into a single-family home community named Walker-Gordon Farm, which consists of over 350 homes.

Other family farms arrived during the first three quarters of the 20th Century, notably the Parker, Simonson, Stults, and Groendyke farms. The Parker Farm was eventually integrated into the Groendyke farm, and both became part of Walker-Gordon's Dairy Farm, which is now a housing development. The Simonson and Stults Farms still stand and operate in Plainsboro. 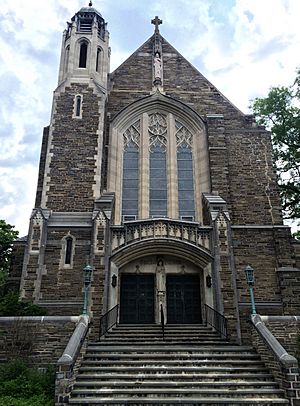 The chapel of St. Joseph's Seminary, built 1914 in Plainsboro, though it bears a Princeton address

In 1971, Princeton University (which owned most of the town) and Lincoln Properties, Inc., together developed the area into what it is now, a large suburban town still holding on to its rural past. In response to the development, West Windsor-Plainsboro High School South was opened in nearby Princeton Junction, then just called WWP High. To accommodate the additional growth, West Windsor-Plainsboro High School North was opened in Plainsboro in September 2000, beginning a North-South rivalry between the Pirates and the Knights.

The latest addition to Plainsboro is the Village Center, which is adjacent to the historic village area. Located at the intersection of Schalks Crossing and Scudder Mills Roads, Plainsboro Village Center currently features eight buildings totaling almost 75,000 square feet (7,000 m2) of retail, commercial and office space, as well as 11 single-family homes and 12 townhomes. The Village Center contains wide landscaped sidewalks and outdoor, cafe'-style seating. The Village center's downtown atmosphere is the location of many shopping and dining destinations. The Village Center features a large village green with a tranquil fountain and walking paths in a park-like setting. The Village Center also houses a new $12.4 million Plainsboro Library, which opened on April 10, 2010. The township broke ground on July 27, for two new buildings that will host medical offices, additional retail space and eight residential condominium units.

A new $447 million hospital facility is being developed in Plainsboro, slated for a 2012 opening. The hospital will be renamed University Medical Center of Princeton at Plainsboro. The new hospital and 171-acre (69 ha) medical campus will include a modern medical office building attached to the hospital, a world-class education center, a health and fitness center, a skilled nursing facility, a pediatric services facility and a 32-acre (13 ha) public park. Officials at the Children's Hospital of Philadelphia (CHOP) announced they will be opening a facility in Plainsboro on 13 acres (5.3 ha) of the new hospital campus.

Plainsboro Center (with a 2010 Census population of 2,712) and Princeton Meadows (13,834 as of 2010) are unincorporated communities and census-designated places (CDPs) located within Plainsboro Township.

Other unincorporated communities, localities and place names located partially or completely within the township include Aqueduct, Schalks and Scotts Corner.

There were 9,402 households out of which 36.5% had children under the age of 18 living with them, 53.4% were married couples living together, 7.0% had a female householder with no husband present, and 37.4% were non-families. 31.2% of all households were made up of individuals, and 3.8% had someone living alone who was 65 years of age or older. The average household size was 2.43 and the average family size was 3.14.

The closest limited access road is the New Jersey Turnpike which is accessible from Interchange 8 in neighboring East Windsor Township and Interchange 8A in Monroe Township.

Suburban Transit buses 300 line to New York from the Park and Ride in Route 130 provides service directly to the Port Authority Bus Terminal in Midtown Manhattan.

There are many cycle routes through Plainsboro, connecting the main shopping districts and down to the D&R Canal cycle pathway. There are a few discontinuities in the cycle routes, but generally they are well-maintained. 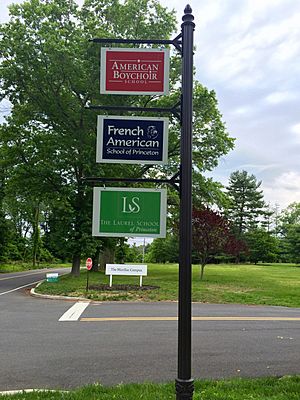 The campus of the former St. Joseph's Seminary is home to a number of private schools

The campus of the former St. Joseph's Seminary, located in Plainsboro, is home to a number of private schools.

People who were born in, residents of, or otherwise closely associated with Plainsboro Township include:

All content from Kiddle encyclopedia articles (including the article images and facts) can be freely used under Attribution-ShareAlike license, unless stated otherwise. Cite this article:
Plainsboro Township, New Jersey Facts for Kids. Kiddle Encyclopedia.