Cranbury is a township in Middlesex County, New Jersey, United States. Located within the Raritan Valley region, Cranbury is roughly equidistant between New York City and Philadelphia in the heart of the state. As of the 2010 United States Census, the township's population was 3,857, reflecting an increase of 630 (+19.5%) from the 3,227 counted in the 2000 Census, which had in turn increased by 727 (+29.1%) from the 2,500 counted in 1990.

A deed for a sale of land and improvements dated March 1, 1698, is the earliest evidence of buildings constructed in present-day Cranbury. A home in Cranbury was used by Alexander Hamilton and the Marquis de Lafayette as a headquarters during the American Revolutionary War, and they were visited by General George Washington on June 26, 1778. As part of orders issued during the Presidency of George Washington, maps of Cranbury were made showing the presence of a church, a mill and 25 other buildings. During its earliest years, the location was usually spelled as "Cranberry". Rev. Joseph G. Symmes argued in 1857 that the name was spelled improperly and that the suffix "bury" was more appropriate, leading the name of the community and brook to be changed to "Cranbury" in 1869. The name has been attributed to wild cranberries that grew in the area.

The so-called Hightstown rail accident occurred in or near Cranbury, in 1833. According to John Quincy Adams, who was aboard the train and who wrote in his diary about it, the train was 3 miles (4.8 km) from Hightstown when the disaster struck, putting the accident near what is now Cranbury Station. Among the passengers aboard were Tyrone Power and Cornelius Vanderbilt.

Cranbury was incorporated as a township by an act of the New Jersey Legislature on March 7, 1872, from portions of both Monroe Township and South Brunswick Township. Portions of the township were taken on April 1, 1919, to form Plainsboro Township.

George Washington's headquarters were located in Cranbury while planning for the Battle of Monmouth, a major turning point during the Revolutionary War.

Many buildings on Cranbury's Main Street and in the surrounding area date to the 18th or 19th century. The entire downtown area is designated as a Historic District, which was added to the National Register of Historic Places in 1980 as District #80002502.

The township celebrated its tricentennial in 1998.

Updike Parsonage Barn was relocated and reconstructed in 2010. 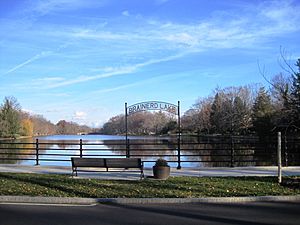 Brainerd Lake in the center of the township 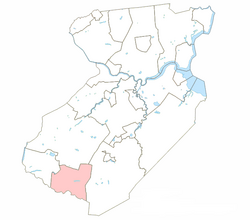 Cranbury CDP (2010 Census population of 2,181) is a unincorporated community and census-designated place (CDP) located within Cranbury Township. Despite the match between the name of the Township and the CDP, the two are not one and the same, as was the case for most paired Township / CDP combinations (i.e., a CDP with the same as its parent township) before the 2010 Census, when most such paired CDPs were coextensive with a township of the same name.

There were 1,320 households out of which 41.4% had children under the age of 18 living with them, 71.3% were married couples living together, 7.0% had a female householder with no husband present, and 19.7% were non-families. 17.5% of all households were made up of individuals, and 7.8% had someone living alone who was 65 years of age or older. The average household size was 2.82 and the average family size was 3.21.

There were 1,091 households, out of which 46.3% had children under the age of 18 living with them, 74.6% were married couples living together, 4.3% had a female householder with no husband present, and 19.6% were non-families. 16.3% of all households were made up of individuals, and 7.9% had someone living alone who was 65 years of age or older. The average household size was 2.92 and the average family size was 3.31.

Cranbury hosts U.S. Route 130 and a 4-mile (6.4 km) section of Interstate 95 (the New Jersey Turnpike). Cranbury is accessible by the Turnpike in neighboring East Windsor Township (Exit 8) and Monroe Township (Exit 8A). The Molly Pitcher Service Area is located at mile marker 71.7 on the southbound side.

The New Jersey Turnpike Authority widened the Turnpike (with the "dual-dual" setup) between Exit 6 in Mansfield Township and Exit 8A in Monroe Township in late 2014. New entrance and exit ramps were constructed to access the service area.

Cranbury is host to many warehouses along Route 130 and the roads leading to the NJ Turnpike. A company making the Boy Scout Pinewood Derby cars is also here. Cranbury was noted for a used Rolls-Royce dealership located in the center of township, but it has gone out of business. The alternative energy business Blacklight Power, which occupies a building formerly occupied by Creative Playthings, is in fact located in East Windsor, in an area served by the Cranbury Post Office.

The Associated University Presses is an academic publishing company supplying textbooks to colleges and universities. 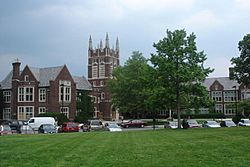 For ninth through twelfth grades, students move on to Princeton High School in Princeton, as part of a sending/receiving relationship with the Princeton Public Schools. Cranbury Township is granted a seat on the Princeton Regional Schools Board of Education, with the designated representative only voting on issues pertaining to Princeton High School and district-wide issues. As of the 2019–20 school year, the high school had an enrollment of 1,582 students and 122.0 classroom teachers (on an FTE basis), for a student–teacher ratio of 13.0:1. Cranbury students had attended Hightstown High School and then Lawrence High School before the relationship was established with Princeton.

The Cranbury Public Library serves Cranbury residents, sharing a facility with the Cranbury School until summer 2020 when the school evicted the library to provide additional learning space during the COVID-19 pandemic. The public library has operated out of a pocket library since early 2021 while a free-standing public library is being built at 30 Park Place West.

People who were born in, residents of, or otherwise closely associated with Cranbury include:

All content from Kiddle encyclopedia articles (including the article images and facts) can be freely used under Attribution-ShareAlike license, unless stated otherwise. Cite this article:
Cranbury, New Jersey Facts for Kids. Kiddle Encyclopedia.