Battle of Monmouth facts for kids 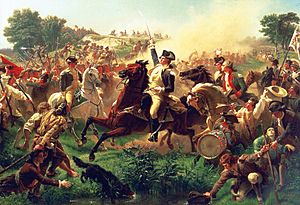 Emanuel Leutze painted Washington Rallying the Troops at Monmouth in 1857.

The Battle of Monmouth or Battle of Monmouth Courthouse was a battle of the American Revolutionary War. It was fought on June 28, 1778 in Monmouth, New Jersey. The British army retreated, but neither side won. Monmouth was the longest battle between the main Continental Army and the main British Army.

Four days earlier, the leaders of the Continental Army (the Americans) met. Some wanted to fight the British army head-on and some did not. Most of the leaders decided to fight small battles and win slowly.

Nathanael Greene and the Marquis de Lafayette also fought in this battle.

Both armies had muskets. The Highland Scots in the British army also had broadswords. The British and the German soldiers had bayonets, long blades attached to the ends of the muskets. The Continental army had been trying to get bayonets. Some of the Virginia troops had rifled firearms.

This was the first time the Continental army used the tactics and training they had learned at Valley Forge from then-Acting Inspector General Friedrich Wilhelm von Steuben.

General Lee asked to be court-martialed for his actions in this battle. He was sentenced to one year suspension.

After the Battle of Monmouth, the war moved to the South.

All content from Kiddle encyclopedia articles (including the article images and facts) can be freely used under Attribution-ShareAlike license, unless stated otherwise. Cite this article:
Battle of Monmouth Facts for Kids. Kiddle Encyclopedia.