Jamesburg was formed as a borough by an act of the New Jersey Legislature on March 19, 1887, when it was created from portions of Monroe Township, based on the results of a referendum held on March 15, 1887. Jamesburg's incorporation was confirmed on April 15, 1915. The borough was named for James Buckelew, who established a mill that became the nucleus of what became Jamesburg.

The borough is the older and more urban core area located in the center of and completely surrounded by Monroe Township, making it part of 21 pairs of "doughnut towns" in the state, where one municipality entirely surrounds another.

There were 2,172 households out of which 36.0% had children under the age of 18 living with them, 51.0% were married couples living together, 12.3% had a female householder with no husband present, and 31.3% were non-families. 25.8% of all households were made up of individuals, and 7.1% had someone living alone who was 65 years of age or older. The average household size was 2.72 and the average family size was 3.26. 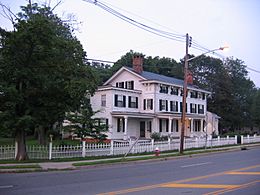 Thompson Park is located on the south western edge of Jamesburg and is also partially in the neighboring town of Monroe. Thompson Park takes up at total of 675 acres (2.73 km2). The 30-acre (120,000 m2) Manalapan Lake is located on the eastern edge of the park. The park in total has four tennis courts, four basketball courts, two handball courts, three baseball fields, a softball field, many soccer fields, multiple picnic groves equipped with grills, three hiking/biking trails, fishing, animal haven, and a gazebo.

The park has three entrances. Two are located on Perrineville Road, and one is located on Forsgate Drive.

Monroe Township Soccer Club hosts a tournament every year on the soccer fields that are located in the park.

The closest limited access road is the New Jersey Turnpike (Interstate 95) at Exit 8A in surrounding Monroe Township. Route 612 provides a connection between the Turnpike/Route 32 and CR 520.

Middlesex County Area Transit (MCAT) shuttles provide service to and from Jamesburg on several routes across the county.

The Jamesburg Public Schools serves students in pre-kindergarten through eighth grade. As of the 2017–18 school year, the district, comprised of two schools had an enrollment of 702 students and 54.0 classroom teachers (on an FTE basis), for a student–teacher ratio of 13.0:1. Schools in the district (with 2017-18 enrollment data from the National Center for Education Statistics) are John F. Kennedy Elementary School (493 students; in grades PreK-5) and Grace M. Breckwedel Middle School (201; 6-8).

Jamesburg High School, founded in 1905, graduated its last class in June 1979. Since 1980, Jamesburg's high school students attend Monroe Township High School in Monroe Township, as part of a sending/receiving relationship with the Monroe Township School District. As of the 2017–18 school year, the high school had an enrollment of 2,307 students and 173.7 classroom teachers (on an FTE basis), for a student–teacher ratio of 13.3:1.

With annual tuition costs per student at Monroe Township High School rising past $16,000 as the Monroe district has added debt service costs into their tuition charges, the Jamesburg Public Schools looked for an alternate high school in the area to send students at lower cost, which would have started with the freshman class in 2012–13, though students already enrolled at Monroe Township High School would continue their attendance there until they graduate. The Jamesburg district contacted 18 districts and received interest from high schools in the Freehold Regional High School District, Matawan-Aberdeen Regional School District, Old Bridge Township Public Schools, South Amboy Public Schools and the West Windsor-Plainsboro Regional School District, which had been sent demographic information in July 2011 about the Jamesburg high school population as part of their review process. By October 2011, the district decided to maintain sending students to Monroe Township, as had been done since 1979.

People who were born in, residents of, or otherwise closely associated with Jamesburg include:

All content from Kiddle encyclopedia articles (including the article images and facts) can be freely used under Attribution-ShareAlike license, unless stated otherwise. Cite this article:
Jamesburg, New Jersey Facts for Kids. Kiddle Encyclopedia.