New Brunswick station is a railroad station in New Brunswick, New Jersey. It serves Amtrak and NJ Transit trains on the Northeast Corridor. The station is located at the intersection of Easton Avenue and French and Albany Streets, near the College Avenue Campus of Rutgers University.

The station has two high-level side platforms serving the outer tracks of the four-track Northeast Corridor. Most of Amtrak's Northeast Corridor services bypass the station via the inner tracks, except for select Keystone Service and Northeast Regional trains and the weekday westbound Palmetto. 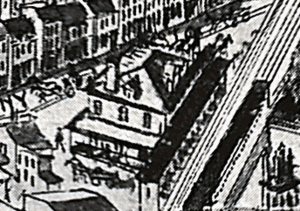 Train service to New Brunswick was begun by the New Jersey Railroad, northbound in 1838 and southbound in 1839. Its successor, Pennsylvania Railroad, built the current station in 1903 when the tracks were raised above street level. Service was eventually taken over by Penn Central and then Amtrak and New Jersey Transit. In 2005, the Clocker trains, a popular commuter service serving the station, were transferred to NJT. In October 2015 the southbound Palmetto began stopping here.

The depot was designed in the Colonial Revival style and includes walls of light brown brick, hipped roof with gabled dormers and a deep cornice with dentil molding at its base. Brick quoins at the corners of the building convey an impression of strength and solidity. Windows display a popular Georgian Revival pattern of 9-over-1. Sills are incorporated into a stone belt course that wraps around the building, while lintels are embellished with prominent keystones. The design is similar to that of the Chester Transportation Center in Pennsylvania.

In 2005 the station was designated the core of the New Brunswick transit village, a smart growth initiative to promote transit-oriented development which can include government incentives to encourage compact, higher density, mixed-use development within walking distance of the station.

In addition to New Jersey Transit bus operations and Rutgers Campus buses, the station is served by local shuttles known as Brunsquick and DASH. Studies are underway to develop the New Brunswick Bus Rapid Transit system, of which the station would be the hub. NJ 18 and NJ 27, which intersect at the station, would function as the two major corridors for a bus network that would connect downtown, residential neighborhoods, the five campuses of Rutgers in the city and Piscataway, and proximate communities.

New Brunswick is one of nine cities in New Jersey designated as eligible for Urban Transit Hub Tax Credits by the state's Economic Development Authority. Developers who invest a minimum of $50 million within 0.5 miles (0.80 km) of a train station are eligible for pro-rated tax credit. The Gateway is one such project located just to the north of station and connected by a new pedestrian bridge, creating a direct link to the Rutgers campus. It is the tallest building in the city and one of several new projects in the vicinity of the station that has led to a revitalization of the city's downtown surrounding it. Another planned building, a 16-story residential tower at Somerset Street located one block north of the station, is the second UTHTC-approved project in the city.

In August 2011 the United States Department of Transportation obligated $450 million to a six-year project to improve 24 miles (39 km) of the Northeast Corridor between New Brunswick and Trenton. The Next Generation High-Speed project is to upgrade electrical power, signals, and overhead catenary wires to improve reliability and increase speed to 160 mph (260 km/h), and with new trains to 186 mph (299 km/h).

All content from Kiddle encyclopedia articles (including the article images and facts) can be freely used under Attribution-ShareAlike license, unless stated otherwise. Cite this article:
New Brunswick station Facts for Kids. Kiddle Encyclopedia.