Metropark is an intermodal transportation hub on the Northeast Corridor in the Iselin section of Woodbridge Township in Middlesex County, New Jersey that is located 24.6 miles southwest of New York Penn Station. It is owned and operated by NJ Transit and serves Amtrak and NJ Transit's Northeast Corridor Line. NJ Transit runs peak period 'loop' buses in coordination with train schedules.

The station is near the interchange of Route 27 and Garden State Parkway near exits 131 and 132. and has a multi-story parking facility that is open at all times.

The station is located in the Iselin section of Woodbridge and is one of three stations NJT operates in the township along with Avenel and Woodbridge stations. Metropark's property is set between Middlesex Essex Turnpike and NJ 27 and is located near Iselin's border with the Colonia section of Woodbridge and the township's border with neighboring Edison. It is reached via Exits 131 or 132 of the Garden State Parkway. 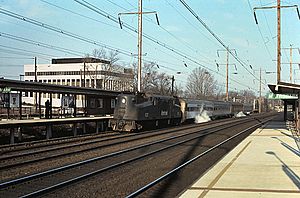 An Amtrak train at Metropark station in January 1976

Metropark was one of two park-and-ride infill stations proposed in the 1960s for use by the new Metroliners, the other being Capital Beltway in Lanham, Maryland, just outside Washington, D.C.. The two stations were originally named Capital Beltway Metropark and Garden State Metropark, though these were shortened to Capital Beltway and Metropark, respectively. Both were conceived as public-private partnerships. Under a plan put forward in late 1968 by the New Jersey Department of Transportation (NJDOT) the state would contribute $648,000 toward the cost of the station, then estimated at $1,400,000.

Amtrak service to Metropark began on November 11, 1971. The new station's cost had increased to $2.6 million, shared by NJDOT and the United States Department of Transportation. It consisted of two 850-foot (260 m) high-level platforms and had 820 parking spaces. The location was right off of the Garden State Parkway to allow for easy access by automobile and a large business park was built next to the station to entice riders. Commuter trains continued to use a station in Iselin, New Jersey. Commuter trains began stopping at Metropark in 1972 and the nearby Iselin station was closed (and, a few years later, Colonia).

The station was renamed Harrison A. Williams Metropark Station in 1979, in recognition of US Senator Williams' (D-NJ) support for its construction. However, the name was removed from the station after his 1980 conviction for bribery and conspiracy in the Abscam scandal.

In January 2007 NJ Transit announced a nearly $30 million renovation plan for the station, to be completed by 2010. Reconstruction was completed in summer 2009, and cost $47 million. Climate-controlled shelters and LCD train information systems were installed, platforms and canopies were lengthened and the station building was enlarged as part of the project. New signage was also installed; all of the new signs refer to the station as "Metropark Station".

The Metropark station is served by New Jersey Transit's Northeast Corridor Line, as well as these Amtrak routes:

Amtrak trains skip most stations between Trenton and Newark Penn Station, but most Amtrak trains stop at Metropark despite having to switch to the outside (local) tracks to do so. Pairs of crossovers (interlockings MENLO and ISELIN) before and after the station were added about 1984 to make this easier.

Since 2001 Metropark has been the busiest New Jersey Transit station apart from the city terminals. Many commuters from the South Shore of Staten Island utilize this station to commute to Manhattan. Along with Princeton Junction in 2006, Metropark was the first non-terminal station to have over 7,000 weekday boardings.

NJ Transit provides rush hour "loop" buses servicing office parks and other areas around Metropark, operated by Academy Express LLC out of their Perth Amboy garage under contract with NJT, and service on NJT 48.

Metropark has a multi-story parking facility that is open at all times. The parking fee is $5 for up to 12 hours, $7 for up to 16 hours, and $9 for up to 24 hours. Annual, semi-annual, and quarterly parking permits are available for discounted rates ($70.00 per month). Drivers may park in either of the two multi-level parking decks using their proximity card for entry and exit. Daily parking users take a ticket upon entry, which must be paid for before exiting the facility. Several self-service kiosks within the garages allow users to pay their daily parking fee before returning to their vehicle.

All content from Kiddle encyclopedia articles (including the article images and facts) can be freely used under Attribution-ShareAlike license, unless stated otherwise. Cite this article:
Metropark station Facts for Kids. Kiddle Encyclopedia.