Iselin is an unincorporated community and census-designated place (CDP) located within Woodbridge Township, in Middlesex County, New Jersey, United States. As of the 2010 United States Census, the CDP's population was 18,695.

Previously known as Perrytown and Unionville, Iselin received its current name after New York investment banker and philanthropist Adrian Georg Iselin, who established a finishing school in the 1870s for girls from wealthy New York families there. Iselin additionally subsidized the erection of a new train station which was replaced by a newer station to the south known as Metropark. The largest bordering town of Iselin is Edison.

Iselin's downtown is centered on Oak Tree Road, bound by the Garden State Parkway to the West, and Route 27 (Lincoln Highway) to the East. Once home to a wide array of shops, eateries, services, and complemented by a single-screen 1920s movie palace, the area was in obvious decline in the 1980s. An influx of Asian Indian immigration beginning in the early 1990s led to the area's revitalization. Formerly vacant stores were tenanted, and additional retail spaces built as the area became known for its high quality Indian food, sweets, clothing (particularly saris), jewelry, music, and other goods. 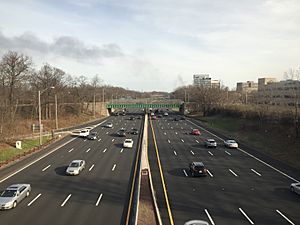 The Garden State Parkway in Iselin

An area known as Metropark, consisting primarily of office parks and large office buildings, lies in the southwestern corner of Iselin and spills over into neighboring Edison. The New Jersey Transit and Amtrak Metropark Station is named for this area.

Iselin hosts one of the region's main centers of Indian American cultural diversity. The growing Little India is a South Asian-focused commercial strip in Middlesex County, the U.S. county with the highest concentration of Asian Indians. The Oak Tree Road strip runs for about one-and-a-half miles through Iselin and neighboring Edison Township, near the area's sprawling Chinatown and Koreatown, running along New Jersey Route 27. The zone is the largest and most diverse South Asian cultural hub in the United States. In Middlesex County, election ballots are printed in English, Spanish, Gujarati, Hindi, and Punjabi. According to the 2017 American Community Survey, 42.6% of Iselin residents identified themselves as being Indian American, the highest percentage for any census-designated place in the United States.

There were 6,445 households out of which 33.2% had children under the age of 18 living with them, 62.4% were married couples living together, 9.4% had a female householder with no husband present, and 24.1% were non-families. 20.7% of all households were made up of individuals, and 10.1% had someone living alone who was 65 years of age or older. The average household size was 2.90 and the average family size was 3.39.

People who were born in, residents of, or otherwise closely associated with Iselin include:

All content from Kiddle encyclopedia articles (including the article images and facts) can be freely used under Attribution-ShareAlike license, unless stated otherwise. Cite this article:
Iselin, New Jersey Facts for Kids. Kiddle Encyclopedia.