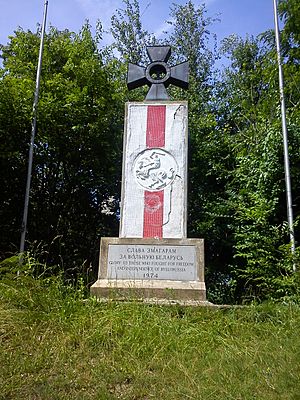 Monument for "Those who fought for Freedom and Independence of Byelorussia"

South River has become a center for Belarusian Americans in the postwar-period. The immigrants reestablished the Belarusian Orthodox parish of St. Eufrasinnia, that previously existed in Germany. In 1953 a Belarusian cemetery was opened, that houses also Radasłaŭ Astroŭski.

The town government council has a Mayor and a Borough Council. It has 6 members that serve three-year terms. Two members are up for election each year.

South River is located in the 12th Congressional District

As of the 2011-12 school year, the district's four schools had a total enrollment of 2,305 students and 163 classroom teachers

The mains roads that travel through are CR 535 and CR 527. Route 18 passes just west of the borough, which provides access to the New Jersey Turnpike (Interstate 95).

New Jersey Transit bus service is provided on the 811 and 815 routes.

All content from Kiddle encyclopedia articles (including the article images and facts) can be freely used under Attribution-ShareAlike license, unless stated otherwise. Cite this article:
South River, New Jersey Facts for Kids. Kiddle Encyclopedia.