Kids Encyclopedia Facts
This page is about the township in New Jersey. For the suburb in Melbourne, Victoria, see Brunswick East, Victoria.

East Brunswick is a township in Middlesex County, New Jersey, United States. The suburban community is part of the New York City metropolitan area and is located on the southern shore of the Raritan River, directly adjacent to the city of New Brunswick. According to the 2010 United States Census, the township's population was 47,512, reflecting an increase of 756 (+1.6%) from the 46,756 counted in the 2000 Census, which had in turn increased by 3,208 (+7.4%) from the 43,548 counted in the 1990 Census.

East Brunswick was incorporated as a township by an act of the New Jersey Legislature on February 28, 1860, from portions of both Monroe Township and North Brunswick Township. Portions of the township were taken to form Washington town within the township (February 23, 1870; became independent as South River on February 28, 1898), Helmetta (March 20, 1888), Milltown (January 29, 1889) and Spotswood (April 15, 1908).

The general area of central New Jersey was once occupied by the Lenape Native Americans. According to a 1677 bill of sale now in the New Jersey State Museum in Trenton, New Jersey, Thomas Lawrence, a New York baker, purchased thousands of acres of land from local Native Americans named Querameck, Kesyacs, Isarick, Metapis, Peckawan, and Turantecas. In this document, the area is called Piscopeek, which later become known as Lawrence Brook, after its purchaser. Around the late 17th century, settlers began arriving in the northern part of East Brunswick, and by the mid-19th century, a small village had formed in the southeastern part, known as the Old Bridge section of the town, an area that was placed on the National Register of Historic Places in 1977.

The area today known as East Brunswick was incorporated in 1860 from parts of North Brunswick and Monroe townships, including the community of Old Bridge. Originally a farming community, suburban settlement started in the 1930s with improved road access. Large scale housing and road construction, especially after World War II, transformed East Brunswick into a more suburban community. The extension of the New Jersey Turnpike to East Brunswick in 1952 led to a sharp spike in population growth, with the 1950 Census population of 5,699 more than tripling to 19,965 as of the 1960 enumeration.

In the early 1970s a citizens group Concerned Citizens of East Brunswick sued the New Jersey Turnpike Authority over a proposed major widening project. The citizens group effectively won this case gaining concessions in turnpike design, scale and mitigation measures for noise and air quality. The citizens group presented technical data from their own experts and prevailed in what was one of the earliest technical confrontations regarding urban highway design related to environmental factors in U.S. history.

East Brunswick was also the site of the gunfight at Turnpike exit 9 shortly after midnight on May 2, 1973, in which a car being driven by Zayd Malik Shakur (born James F. Costan), with Assata Shakur (formerly JoAnne Chesimard) and Sundiata Acoli (born Clark Squire) as passengers, was stopped on the New Jersey Turnpike State Trooper James Harper, backed up by Trooper Werner Foerster in a second patrol vehicle. After Zayd Shakur was asked to step out of the car to address a discrepancy in his identification, a shootout ensued in which Trooper Foerster was shot twice in the head with his own gun and killed, Zayd Shakur was killed, and both Assata Shakur and Trooper Harper were wounded.

The township lies on exit 9 of the New Jersey Turnpike. Its Municipal Building, named for 1970s Mayor Jean Walling, is located 31 miles (50 km) southwest of New York City's Times Square and 49 miles (79 km) northeast of Center City, Philadelphia. It takes approximately 45–60 minutes to reach Midtown Manhattan or Center City, Philadelphia, depending on traffic and destination. Route 18 runs through the eastern part of the township.

Lawrence Brook, a tributary of the Raritan River, runs along the western border of the township. Farrington Lake and Westons Mill Pond are sections of the Lawrence Brook that have been widened by the presence of man-made dams.

Unincorporated communities, localities and place names located partially or completely within the township include Brookview, and Westons Mills. 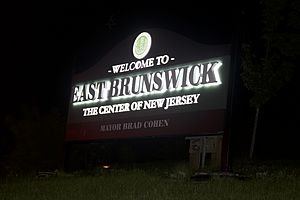 There were 16,810 households out of which 37.2% had children under the age of 18 living with them, 65.8% were married couples living together, 9.5% had a female householder with no husband present, and 21.6% were non-families. 19.0% of all households were made up of individuals, and 8.5% had someone living alone who was 65 years of age or older. The average household size was 2.81 and the average family size was 3.23.

Route 18 passes through East Brunswick, and is an important artery connecting New Brunswick, U.S. Route 1, the Jersey Shore, and the New Jersey Turnpike, Interstate 95 (which also passes through the township). Route 18 connects with exit 9 of the Turnpike around mile marker 83.43. Currently, there are 15 lanes at the 9 toll gate. The Turnpike's Joyce Kilmer service area is located between interchanges 8A and 9 northbound at milepost 78.7. Major county roads that pass through include CR 527 and CR 535. Other limited access roads are accessible outside the township, such as the Garden State Parkway in neighboring Sayreville and Old Bridge, and Interstate 287 in neighboring Edison Township.

NJ Transit bus service is provided on the 138 route to the Port Authority Bus Terminal in Midtown Manhattan, on the 68 to Jersey City, and on the 811, 815 and 818 local routes. The MCAT shuttle system provides local service on the M2 route serving The Brunswick Square Mall, Monroe and Jamesburg.

Suburban Transit operates bus routes to New York City every 10–15 minutes from both the Transportation Center and Tower Center; it takes about 30–50 minutes depending on traffic. Service to the Port Authority Bus Terminal is available on Line 100 from Princeton and on Line 400 from the Transportation Center, to 59th Street and Madison Avenue on Line 300, to the United Nations on Line 500, and to Wall Street on Line 600.

The former Raritan River Railroad, now part of Conrail, runs through the town, where two businesses still receive weekly freight shipments of plastic. There have been proposals to turn the line into a light rail corridor.

With easy access to major highways like Route 18 and the New Jersey Turnpike, East Brunswick's proximity to cities such as New Brunswick, New York, Newark, and Philadelphia has contributed in the township being a longtime premier economic center in the Central New Jersey region.

Giamarese Farm & Orchards is a family owned business covering 35 acres (14 ha) and dating to 1941. It is a popular seasonal attraction for East Brunswick residents, located on Fresh Ponds Road in the southern section of the township.

Opened in 1970, Brunswick Square is a single-story regional shopping mall, located on the corner of Route 18 and Rues Lane. The mall is currently anchored by Macy's and JCPenney and it has a gross leasable area (GLA) of 769,041 sq ft (71,446.2 m2). Outside of Brunswick Square, the township itself has many other shopping malls and plazas, mostly dotted on Route 18. There are some other notable shopping destinations near East Brunswick, including the Menlo Park Mall in Edison, Woodbridge Center in Woodbridge, the Freehold Raceway Mall in Freehold, and The Shoppes in Old Bridge.

The Tower Center complex includes two 23-story office towers, a 15-story Hilton Hotel and a Holiday Inn Express hotel, located near the intersection of the New Jersey Turnpike and Route 18. The two towers are among the tallest structures in Central Jersey, and can be seen for several miles.

Hatikvah International Academy Charter School, a Hebrew language charter school that offers an International Baccalaureate program opened in September 2010 for grades K-7, with plans to add a new grade each year until an eighth grade is offered. A lottery is held each year, with separate draws for residents of East Brunswick Township and non-residents, to allocate the limited number of positions available for each class. The school plans to build a permanent structure as part of the Campus for Jewish Life (formerly known as the YM-YWHA of Raritan Valley) to replace its current facility the school has rented located near Trinity Presbyterian Church. Concerns have been raised regarding the funding for the school, which will come from the East Brunswick Board of Education budget, including $1.34 million for the 2010–11 school year, and that the district will not be able to reduce expenses by the amount that will be paid to the charter school. Hatikvah school officials emphasize that charter schools can often educate students at a lower cost than traditional public schools and that "taxpayers do not pay an extra penny for having a charter school in town, period". The school received $75,000 in grants from foundations to cover the costs of applying for a charter and for getting the school operational. Hatikvah budgeted $11,033 per student for the 2010–11 school year, while the East Brunswick Public Schools budgeted $12,782 per pupil for that same year. As of the 2017–18 school year, the school had an enrollment of 442 students and 34.7 classroom teachers (on an FTE basis), for a student–teacher ratio of 12.8:1.

Solomon Schechter Day School of Raritan Valley, a Conservative Jewish day school, closed its doors before the start of the 2013–14 school year in the wake of sharply lower enrollment and financial difficulties. During the 2009–10 school year, the school was awarded the Blue Ribbon School Award of Excellence by the United States Department of Education, the highest award an American school can receive.

Saint Bartholomew's School is a Catholic elementary school serving 323 students in Pre-K through eighth grade as of the 2017–18 school year. The school operates under the supervision of the Roman Catholic Diocese of Metuchen.

People who were born in, residents of, or otherwise closely associated with East Brunswick include:

All content from Kiddle encyclopedia articles (including the article images and facts) can be freely used under Attribution-ShareAlike license, unless stated otherwise. Cite this article:
East Brunswick, New Jersey Facts for Kids. Kiddle Encyclopedia.