Jesse Adam Eisenberg (born October 5, 1983) is an American actor, author, and playwright. Born in New York City and raised in East Brunswick, New Jersey, Eisenberg began acting in plays at an early age, and made his television debut with the short-lived comedy-drama series Get Real (1999–2000).

In 2009, Eisenberg had his breakthrough with starring roles in the comedy-drama film Adventureland and the horror comedy Zombieland. His portrayal of Facebook founder Mark Zuckerberg in David Fincher's The Social Network (2010) earned him nominations for various awards, including the BAFTA, Golden Globe, and Academy Award for Best Actor. He also starred in Holy Rollers (2010), which was nominated for the Grand Jury Prize at the 2010 Sundance Film Festival.

Eisenberg has contributed pieces to The New Yorker and McSweeney's websites. He has written and starred in three plays for the New York stage.

Charity work and other interests 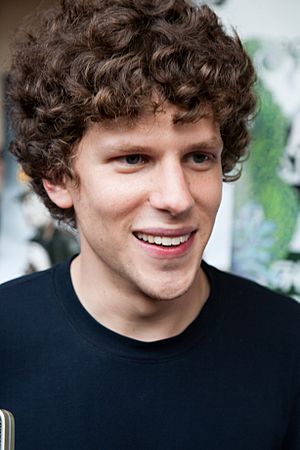 Eisenberg is fond of cats and has been involved in fostering animals. He is a vegetarian, and was vegan for a short period of time. He has been associated with Farm Sanctuary and has presented at several of their galas.

In September, 2015, Eisenberg announced that he would match donations made to Middle Way House, a domestic violence shelter in Bloomington, Indiana, up to $100,000 until April 3, 2016. In an interview with Variety in March 2018, Eisenberg stated that he has raised almost $1 million for the shelter.

Eisenberg is also a cast member with Theater of War, a performing arts non-profit that presents readings of Sophocles's Ajax and Philoctetes to military and civilian communities across the United States and Europe.

Eisenberg is involved with Keep America Beautiful, which "[engages] individuals to take greater responsibility for improving their community environments."

All content from Kiddle encyclopedia articles (including the article images and facts) can be freely used under Attribution-ShareAlike license, unless stated otherwise. Cite this article:
Jesse Eisenberg Facts for Kids. Kiddle Encyclopedia.