Rio 2 is a 2014 American 3D computer-animated musical comedy film produced by Blue Sky Studios and directed by Carlos Saldanha. It is the sequel to the 2011 computer-animated film Rio. The title refers to the Brazilian city of Rio de Janeiro, where the first film was set and Rio 2 begins, though most of its plot occurs in the Amazon rainforest. The film stars Jesse Eisenberg, Anne Hathaway, will.i.am, Jamie Foxx, George Lopez, Tracy Morgan, Jemaine Clement, Leslie Mann, Rodrigo Santoro, and Jake T. Austin reprising their roles from the first film with new members including Bruno Mars, Andy Garcia, Rita Moreno, Rachel Crow, Kristin Chenoweth, Amandla Stenberg, Pierce Gagnon, and Miguel Ferrer, the film was released internationally on March 20, 2014, and on April 11, 2014, in American theaters. The film grossed $498 million worldwide, against a production budget of $103 million.

Spix's Macaws Blu and Jewel and their three children—Bia, Carla, and Tiago—are living happily in the city but Jewel is disappointed to see her children becoming too domesticated like their father. Meanwhile, Blu's former owner, Linda Gunderson and her ornithologist husband Tulio are on an expedition in the Amazon and, after a fall down a waterfall, discover a quick-flying Spix's macaw that loses one of its feathers. When word gets out about this through television, Jewel believes that they should go to the Amazon to help find the blue macaws. While the kids are ecstatic, Blu is uncertain, but he is pressured into going along. Blu brings a fanny pack full of supplies, including a GPS, much to Jewel's chagrin.

Meanwhile, the leader of a group of illegal loggers named Big Boss, discovers Linda and Tulio's expedition to find the macaws and orders his henchmen to hunt them down to avoid disruptions to their work. At the same time, the Sulphur-crested cockatoo Nigel plots to exact revenge on Blu along with his new comrades, an anteater named Charlie and a poison dart frog named Gabi, who is in love with Nigel. After they arrive at the jungle, Blu, his family, and their friends, Rafael the toucan, Pedro the cardinal, and Nico the canary initially find nothing. However, they are eventually taken to a flock of blue macaws that are hiding in an uncharted section of the Amazon. There, they meet Jewel's long-lost father, Eduardo, paternal aunt Mimi, and her childhood friend, Roberto. Eduardo seems unimpressed with Blu, but expresses gratitude to him over bringing Jewel back home. Having lost their previous habitat to arson from the illegal loggers which also caused Jewel to be separated from the flock, Eduardo is incredibly anti-human, and angrily brushes off Blu's suggestion to expose the sanctuary to Linda and Tulio to ensure their protection. At the same time, Blu is intimidated by Roberto, who quickly bonds with the kids.

While searching for the macaws, Linda and Tulio are eventually captured by the loggers. Meanwhile, Blu does his best to fit in with the flock, as his family are doing, but his continued reliance on human tools prevent him from connecting with anyone. Meanwhile, in another attempt to get closer to Blu, Nigel successfully wins a talent show to become a performer for a Carnival show that Rafael, Pedro, Nico and Blu's daughter Carla are hosting. When Blu tries to pick a Brazilian nut for Jewel, he accidentally tries to get it in the territory of the Spix macaw's enemies, the scarlet macaws, led by the hostile Felipe. Blu inadvertently causes war between the two tribes for food when he accidentally swats Felipe with a branch. The war turns out to be a football (soccer) match, but Blu accidentally costs the flock their territory when he scores his team's own goal. He flies off, upset over his failures despite his best intentions and efforts to fit in.

Blu decides that he will leave his human roots behind him if it means building a future with his family. With Blu's knowledge of human technology and help from the scarlet macaws, they disable the loggers' machinery. Big Boss tries blowing up the trees with dynamite instead, but Blu thwarts him. Big Boss tries to stop Blu, but Nigel intervenes, wanting Blu to himself, leaving him at the mercy of an anaconda. Nigel then attacks Blu in a final attempt to get revenge, but Gabi, while attempting to help, inadvertently knocks Nigel out with one of a porcupine's quills filled with her poison. However, Bia realizes that Gabi is not poisonous at all, and an overjoyed Gabi lovingly smothers a dismayed Nigel and drags him away.

With the flock now under Linda and Tulio's protection, Blu and Jewel decide to live in the Amazon with their kids, though still agreeing to visit Rio in the summer. Eduardo finally drops his anti-human stance by wearing a fanny pack of his own, and proudly accepts Blu into the flock. Nigel and Gabi are sent to Rio for study, Nico and Pedro's Carnival show goes on, and Luiz the bulldog arrives at the Amazon for a visit. 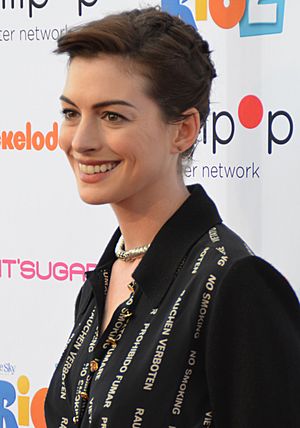 Anne Hathaway at the film's screening at Nickelodeon Studios in Burbank, California on April 26, 2014

Director Carlos Saldanha has kept the possibility for Rio 3 open. In April 2014, he stated, "Of course, I have a lot of stories to tell, so we're [starting to] prepare for it.".

On October 25, 2019, after the acquisition of 21st Century Fox by Disney, it was announced that a spin-off that centered on Nico and Pedro is in development for Disney+.

All content from Kiddle encyclopedia articles (including the article images and facts) can be freely used under Attribution-ShareAlike license, unless stated otherwise. Cite this article:
Rio 2 Facts for Kids. Kiddle Encyclopedia.