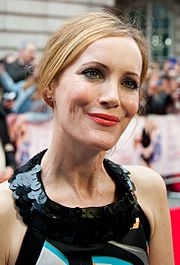 Leslie J. Mann (born March 26, 1972) is an American movie, television, stage, and voice actress who is known for her roles in Funny People, ParaNorman, This Is 40, Knocked Up, and in The Change-Up.

Mann was born on March 26, 1972 in San Francisco, California. She studied at Corona del Mar High School. She has been married to Judd Apatow since 1997. They have two children. She is the older sister of Anderson Mann

All content from Kiddle encyclopedia articles (including the article images and facts) can be freely used under Attribution-ShareAlike license, unless stated otherwise. Cite this article:
Leslie Mann Facts for Kids. Kiddle Encyclopedia.