In addition to his film career, Rudd has appeared in numerous television shows, including the NBC sitcom Friends as Mike Hannigan, along with guest roles on Tim and Eric Awesome Show, Great Job! and Parks and Recreation (as businessman Bobby Newport) and hosting Saturday Night Live. Rudd received a star on the Hollywood Walk of Fame on July 1, 2015. He was part of Forbes Celebrity 100 in 2019. 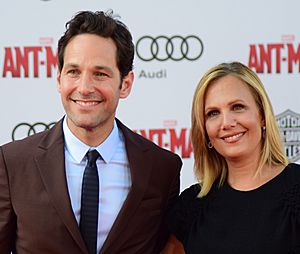 Rudd was born in Passaic, New Jersey. His father, Michael Rudd, was a historical tour guide and former vice-president of Trans World Airlines who died of cancer when Rudd was 39. His mother, Gloria Irene (Granville), was a sales manager at the television station KCMO-TV in Kansas City, Missouri. His parents were born in England; his father was from Edgware and his mother from Surbiton, both in London. Rudd's parents were both Jewish (descended from Jewish immigrants who moved to Britain from Russia, Belarus, and Poland). Rudd's parents were second cousins. His father's family's original surname, "Rudnitsky", was changed by his grandfather to "Rudd", and his mother's family's surname was originally "Goldstein". Rudd had a Bar Mitzvah service. Growing up, he loved reading British comics, The Beano, and The Dandy, which his uncle in the U.K. would send to him.

At age ten, his family moved to Lenexa, Kansas. They spent three years living in Anaheim, California, because of his father's occupation. Rudd attended Broadmoor Junior High and graduated from Shawnee Mission West High School in the class of 1987. Rudd attended the University of Kansas, where he majored in theater. He was a member of the Sigma Nu fraternity's Nu Chapter there. He studied at the American Academy of Dramatic Arts/West in Los Angeles with fellow actor Matthew Lillard. Rudd spent three months studying Jacobean drama at the British American Drama Academy based in Oxford, England. While attending acting school, Rudd worked as a Bar Mitzvah disc jockey.

In 2003, Rudd married Julie Yaeger, whom he met shortly after working on Clueless in his publicist's office where Yaeger was employed. They have two children: a son, Jack Sullivan (b. 2004) and a daughter, Darby (b. 2009).

Rudd is a fan of MLB's Kansas City Royals and of the NFL's Kansas City Chiefs, for whom he narrated the 2007 season of HBO's Hard Knocks.

Rudd received a star on the Hollywood Walk of Fame on July 1, 2015. He unveiled the 2,554th star on the mile-long strip of plaques on Hollywood Boulevard. At the occasion Rudd said, "I remember being a kid and walking this boulevard and reading the names and thinking about what so many other millions of people thought about, which is, you know, 'Who's that?'"

Rudd is a supporter of the Stuttering Association for the Young (SAY), a nonprofit organization dedicated to helping young people who stutter. He hosted the organization's 6th Annual All-Star Bowling Benefit on January 22, 2018. Rudd told Vanity Fair that he became an advocate for stuttering awareness after portraying a character who stutters in a play. Rudd is also a founder of the charity The Big Slick, a celebrity studded sports-focused event held in Kansas City every June to support the works of Kansas City's Children's Mercy Hospital.

Since 2014, Rudd and fellow actor Jeffrey Dean Morgan have been co-owners of Samuel's Sweet Shop, a candy store in the town of Rhinebeck, New York, that they saved from being closed after the previous owner, a friend of theirs, died suddenly.

All content from Kiddle encyclopedia articles (including the article images and facts) can be freely used under Attribution-ShareAlike license, unless stated otherwise. Cite this article:
Paul Rudd Facts for Kids. Kiddle Encyclopedia.