Rhinebeck is a town in Dutchess County, New York, United States. The population was 7,548 at the 2010 census. It is part of the Poughkeepsie-Newburgh-Middletown metropolitan area as well as the larger New York metropolitan area.

U.S. Route 9 passes through the town. It also includes the hamlet of Rhinecliff, which has an Amtrak station with service to Rutland, Montreal, Toronto, Chicago, Cleveland, Buffalo, Albany, and New York City.

Rhinebeck is home of the Dutchess County Fair, a popular agricultural fair.

The west town line, marked by the Hudson River, is the border of Ulster County. Neighboring Dutchess County towns are Red Hook to the north, Milan and Clinton to the east, and Hyde Park to the south. 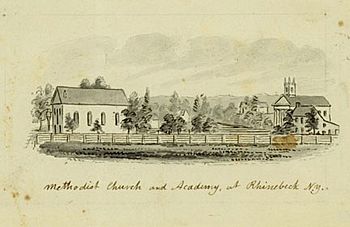 The Methodist Church and Academy at Rhinebeck, N.Y. (circa 1856-1860) by John Warner Barber

In 1941, in Rhinebeck, a set of four historic panoramas of London, dating from about 1810, were found lining a barrel of pistols. The Rhinebeck panorama was acquired by the Museum of London in 1998.

Communities and locations in the Town of Rhinebeck

All content from Kiddle encyclopedia articles (including the article images and facts) can be freely used under Attribution-ShareAlike license, unless stated otherwise. Cite this article:
Rhinebeck (town), New York Facts for Kids. Kiddle Encyclopedia.