Milan is a town in Dutchess County, New York, United States. The town is in the northern part of the county and is very rural. As of the 2010 census it had a population of 2,370. Milan is located about 90 miles (140 km) north of New York City, 60 miles (97 km) south of Albany, and 150 miles (240 km) west of Boston. It is bordered by Rhinebeck and Red Hook to the west, Pine Plains to the east, Stanford to the southeast, Clinton to the south, and Gallatin to the north in Columbia County. The only major route in the town is the historic Taconic State Parkway, though NY 199 serves as the main local thoroughfare. 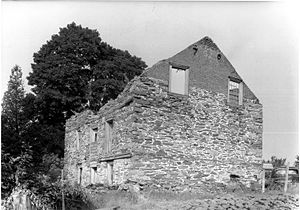 The 1766 Johannes Rowe House photographed in 1940, now gone. Was on Rowe Road near the Town Hall.

The area that comprises Milan today was the western part of the Little Nine Partners Patent of 1706. Milan was largely a farming and mill town and remains a very rural town today.

The first settler in the area was Johannes Rowe. The son of a Palatine immigrant, Rowe bought 911 acres (3.69 km2) from Robert Livingston and built a stone house in 1766 on what is now Rowe Road near the Milan Town Hall. The remains of the house were photographed in 1940 for the Historic American Buildings Survey.

The New York State Legislature voted on March 6, 1818, to create the town of Milan from the western part of the town of North East, to be effective "from and after the last day in March" 1818. The session laws stated that the first town meeting would be held the first Tuesday of April and at the home of Stephen Thorn, who was elected town supervisor along with John F. Bartlett, town clerk. 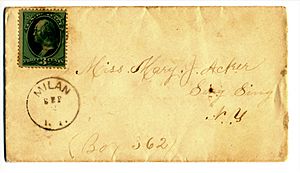 The Milan Post Office operated from 1818 to 1908 at what is now Case's Corner. A rare cancellation shown above.

Two 19th century histories of the town of Milan and Dutchess County (1877 and 1882) state there is no knowledge or evidence as to why the name "Milan" was chosen.

But the name Milan had appeared in other areas of the state, and it was not unusual to take European city names at the time. What is now the city of Syracuse was known as "Milan" for a brief period between 1809 and 1812. A settlement 40 miles (64 km) south of Syracuse was originally called "Milan" in 1790 before incorporation in 1802 as the town of Locke. An unincorporated village there continued to be referred to as "Milan" but gave up its Milan Post Office designation on July 29, 1817, becoming "Locke" Post Office. This cleared the way for the operation of the Milan Post Office on August 14, 1818, at what is now Case's Corners.

So in 1818 the name "Milan" was secured for both the town and one of the hamlet post offices.

The main thoroughfares for the community ran from the Hudson River to Salisbury, Connecticut, and travelers referred to the road as the "turnpike." It later became recognized as the Salisbury Turnpike, and sections of the road still exist today and bear that name.

In addition to farming and local mills in Milan, lead and iron were mined in areas around what is now Millerton, New York, and Salisbury, Connecticut, which was then brought to Livingston's furnaces at Ancram in Columbia County. Milan was "in-between" those towns and the river and as a result had a great deal of important commercial traffic going east–west through the town.

The early population peaked in 1840 at 1,745 residents and went into decline until 1930 with only 622 residents. It was the opening of the Erie Canal (1825) and then the development of the railroad and the move to river cities and the western migration that caused the decline. Also, Milan's soil was hilly and rocky and tough to farm. Then following the 1930s and the Great Depression the population grew again, due in part to the construction of the Taconic Parkway which ended in Milan at the time, and then the post World War II boom.

The 1840 population level was reached again in 1980, some 140 years later. From the 1980s to the turn of the new century Milan was one of the fastest-growing towns in Dutchess County. However, it remains the least populous town in Dutchess County.

The north town line is the border of Columbia County.

The Taconic State Parkway runs north–south along the eastern part of the town. The entire highway, including its supporting structures, are listed on the National Register of Historic Places.

New York State Route 199 runs east–west through the town of Milan, going to Red Hook and over the Kingston–Rhinecliff Bridge to the west. It is the direct route to Pine Plains and Millerton to the east.

The New York State Department of Environmental Conservation owns, manages and maintains two Multiple Use Areas in Milan. Both are east of the Taconic State Parkway.

The Lafayetteville Multiple Use Area comprises 769 acres (3.11 km2), with an entrance on Route 199 between the Taconic State Parkway and New York State Route 82.

The town of Milan owns, manages and maintains the Milan Rec Park on South Road. It contains a softball field and children's play area, and has a trail maintained by the Milaners Youth Group. It is also the location of the recycling and transfer station.

In 2002 the Durst Organization, largely known for its high-rise developments in Manhattan, bought 2,300 acres (9.3 km2) that straddles the town of Milan and Pine Plains, with plans to create a second home and recreational community. The original proposal included almost 1,000 homes along with golf courses. Durst's January 2010 revised plans would allow for 624 homes (572 in Pine Plains and 52 in Milan).

By 2002 Red Wing Sand and Gravel of East Fishkill had bought two large parcels in the northern part of Milan (269 acres (1.09 km2) on Turkey Hill Road and 163 acres (0.66 km2) on Academy Hill Road) with a view to operating two large-scale mines. But on March 30, 2010, the New York Supreme Court ruled in favor of the Town of Milan and its town-wide ban on mining. The town was defended successfully by the office of the New York Attorney General, preventing the mining company from proceeding to develop mines at those locations.

There were 964 households, out of which 30.6% had children under the age of 18 living with them, 55.0% were headed by married couples living together, 7.3% had a female householder with no husband present, and 32.6% were non-families. 24.5% of all households were made up of individuals, and 9.1% were someone living alone who was 65 years of age or older. The average household size was 2.45, and the average family size was 2.94.

Communities and locations in Milan 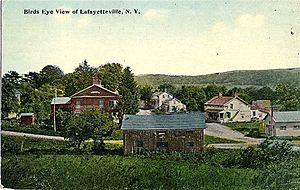 All content from Kiddle encyclopedia articles (including the article images and facts) can be freely used under Attribution-ShareAlike license, unless stated otherwise. Cite this article:
Milan, New York Facts for Kids. Kiddle Encyclopedia.