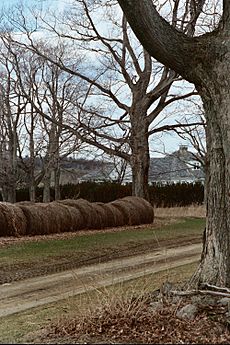 Ancram is a town in Columbia County, New York, United States. The population was 1,573 at the 2010 census. The town was named after Ancram (now Ancrum), Scotland.

Ancram is in the southeast corner of the county.

Prior to European colonization, the area had been occupied for thousands of years by varying indigenous cultures. Historic Native American nations included the Mahican and Wappinger.

Recorded as part of the land grant to the Livingston family, this area on the Roeliff Jansen Kill was originally called "Livingston Forge" after the iron foundry developed on the river. Throughout the eighteenth century, the Livingston forge created metal products for the community. The town was sometimes known as "Scotchtown" due to the immigrants of Scottish ancestry who flocked there in the late 18th century. As the Revolution drew near, the factory produced shot, cannonballs, and perhaps most importantly, the huge chain which was installed across the Hudson River at West Point as a defense against British ships going upriver. The "Fort Montgomery Chain" was worked up in 1776 at the Ancram foundry and placed across the Hudson River near West Point between Fort Montgomery and Fort Clinton. On October 6, 1777, British forces attacked the two forts, choosing to outflank the forts on land rather than test the strength of the chain directly. It is believed that the chain was confiscated by the British forces when they retreated from the fort several weeks later. Its whereabouts is unknown but one prominent British historian surmises it was shipped to Gibraltar to defend shipping in that British colony.

After the Revolution, the town was established from part of the town of Livingston in 1803, and was then called "Gallatin". In 1814, the name was changed to "Ancram", after the town in Scotland where the Livingstons had their origins. Part of Ancram was taken to form a new town of Gallatin in 1830.

Mining of iron and lead was important in the early economy; the town of Ancramdale was originally known as "Ancram Lead Mines".

The hamlet of Boston Corner was formerly part of the town of Mount Washington, Massachusetts. Because it was more accessible from Ancram, it was annexed by the New York town on April 13, 1857, by an agreement between the states.

There were 595 households out of which 30.4% had children under the age of 18 living with them, 58.7% were married couples living together, 8.6% had a female householder with no husband present, and 27.6% were non-families. 20.5% of all households were made up of individuals and 8.1% had someone living alone who was 65 years of age or older. The average household size was 2.54 and the average family size was 2.91.

Communities and other locations

All content from Kiddle encyclopedia articles (including the article images and facts) can be freely used under Attribution-ShareAlike license, unless stated otherwise. Cite this article:
Ancram, New York Facts for Kids. Kiddle Encyclopedia.