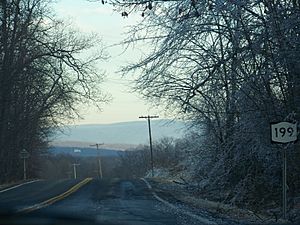 New York State Route 199 (NY 199) is a road in the Hudson Valley of New York, United States. It is 30.91 miles (49.74 km) long, and goes from near Kingston to Millerton. In between, NY 199 crosses over the Hudson River over a bridge and passes through the communities of Red Hook and Pine Plains. Part of the road was part of the Ulster and Delaware Turnpike. NY 199 was named in 1930.

All content from Kiddle encyclopedia articles (including the article images and facts) can be freely used under Attribution-ShareAlike license, unless stated otherwise. Cite this article:
New York State Route 199 Facts for Kids. Kiddle Encyclopedia.