Kids Encyclopedia Facts
This page is about the town. For the village within the town, see Red Hook (village), New York. For the neighborhood in Brooklyn, see Red Hook, Brooklyn.

Red Hook is a town in Dutchess County, New York, United States. The population was 11,319 at the 2010 census. The name is supposedly derived from the red foliage on trees on a small strip of land on the Hudson River. The town contains two villages, Red Hook and Tivoli. The town is in the northwest part of Dutchess County. U.S. Route 9 and State Route 9G pass through the town.

The region was settled in the late 17th century under the Schuyler Patent. Prior to 1812, Red Hook was part of the town of Rhinebeck. Because Rhinebeck, as well other towns, had populations over 5,000 residents, the state legislature authorized the separation of these two precincts on June 12 to accommodate and encourage public attendance at town meetings via horseback or carriage. The first documented Town of Red Hook meeting was on April 6, 1813, in a local inn and held yearly afterwards as required by law. Wealthy landowning farmers oversaw the maintenance of their assigned roads with the help of their farm workers and neighbors. The Red Hook Society for the Apprehension and Detention of Horse Thieves is thought to be one of the oldest formal organizations in the state and still holds an annual meeting.

There were 3,574 households out of which 35.5% had children under the age of 18 living with them, 56.5% were married couples living together, 9.3% had a female householder with no husband present, and 30.8% were non-families. 23.4% of all households were made up of individuals and 9.1% had someone living alone who was 65 years of age or older. The average household size was 2.63 and the average family size was 3.14.

Communities and locations in the Town of Red Hook 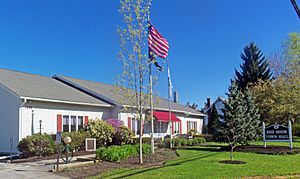 All content from Kiddle encyclopedia articles (including the article images and facts) can be freely used under Attribution-ShareAlike license, unless stated otherwise. Cite this article:
Red Hook, New York Facts for Kids. Kiddle Encyclopedia.