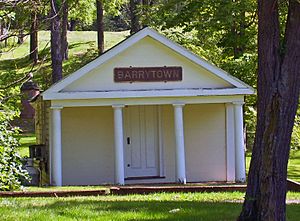 Horseback riders in Barrytown in 1902, including FDR

Barrytown is a hamlet within the town of Red Hook in Dutchess County, New York, United States. It is within the Hudson River Historic District, a National Historic Landmark, and comprises four of the Hudson River Valley estates: Edgewater, Messina, Rokeby, and Sylvania. The Messina Property, at the northern sector of the hamlet was purchased in 1929 by the New York District of the Roman Catholic religious institute, the Brothers of the Christian Schools, who established on that site the St. Joseph's Normal Institute as a teacher training facility for their Junior and Senior Novices. In 1975 the property was bought by the Unification Church, where its Unification Theological Seminary is located. The majority of the houses in Barrytown were built in the mid to late nineteenth century, often with the purpose to house workers at the local estates and accompanying farms. Barrytown was named in honor of President Andrew Jackson's Postmaster General, William Taylor Barry, who served in that capacity from 1829 to 1835.

All content from Kiddle encyclopedia articles (including the article images and facts) can be freely used under Attribution-ShareAlike license, unless stated otherwise. Cite this article:
Barrytown, New York Facts for Kids. Kiddle Encyclopedia.