The original section of the main house was built 1811–1815. Construction was interrupted by the War of 1812 when John Armstrong Jr. (1758-1843), the owner, served as a Brigadier General, Minister to France, and later as US Secretary of War under James Madison. When the British burned Washington DC in 1814, Armstrong received much of the blame, as he had previously insisted that the British would not attack Washington and failed to properly provide for the defense of the city; he consequently retired to finish building his estate on the Hudson River in 1815. The Armstrongs originally called their home "La Bergerie," French for "the sheepfold," as they were raising a large herd of Merino sheep which had been a gift from Napoleon Bonaparte.

In 1818, Armstrong's daughter, Margaret Rebecca, married William Backhouse Astor, Sr. (1795–1875), son and main heir of John Jacob Astor. In 1836, William Astor purchased the 728-acre estate from his father-in-law for $50,000. The portion of the property containing the Mudder Kill is said to have reminded Margaret Astor of the glen in Sir Walter Scott's epic poem, Rokeby, and she changed the estate's name from "La Bergerie" to "Rokeby."

Evidence suggests that the overall plan was designed by John Armstrong himself. It started as a rectangular, 2-story structure with a hipped roof topped by a square, pyramidal-roofed cupola. The house had a three-bay front facade with five-bay side elevations. There is a central entrance and interior hall which opens into three rooms on each side, and a curved staircase was located at the back of this hall. The staircase returned and entered a rectangular hall with a large skylight (known as a clerestory) on the second floor. The four front bedrooms were accessed from this hall. There was originally a second straight staircase that led from grade to an elaborate door with sidelights on the second floor which was open to the main hall. Due to later alterations, this feature is now completely enclosed. On the other side of the door there is now a small vestibule, an arched passage, and a small flight of stairs descending to the main staircase. It features a Palladian window on the southeast face of the second story. A 1+1⁄2-story addition constructed of fieldstone was built about 1816.

In the mid-19th century William Backhouse Astor enlarged the house from 20 rooms to 48, in brick with brownstone trim, with a semi-octagonal tower on the west side, a north wing, and a third floor throughout the building. The service wing, tower and mansard roof date to 1857-1858. The spectacular gothic revival library contained within the tower is probably the work of Alexander Jackson Davis. Architect and Chanler family friend Stanford White was hired to enlarge the west drawing room and to install the clerestory in 1895. A sun porch was added in the 1920s. 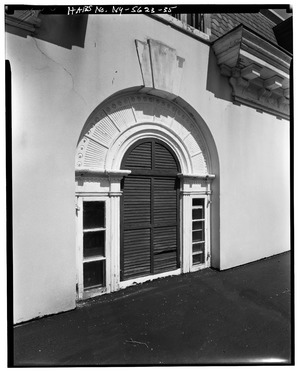 The landscaping was improved about 1846 by Hans Jacob Ehlers, who removed a nearby hill to permit a view of the Hudson River. In 1911 the Olmsted Brothers enlarged the flower gardens and planted an apple orchard. The property also includes a pair of clapboarded wood-frame barns, additional stables (built about 1850 and destroyed by fire), greenhouse (converted to a garage in 1910, then to a residence in 1965), the square brick gardener's cottage, and a 1+1⁄2-story gatehouse. Additionally, there is a brick stable designed by McKim, Mead & White, and a private docking facility.

John Armstrong Jr. lived at Rokeby following his retirement in 1814 until his death at home in 1843, and is buried in the cemetery in Rhinebeck. WIlliam and Rebecca Astor's daughter Emily married Samuel Cutler Ward, brother of Julia Ward Howe. Their daughter, Margaret Astor Ward (1838-1875) married John Winthrop Chanler (1826-1877).

The house was later home to the Astor Orphans, the children of John and Margaret, both of whom died of pneumonia. They left instructions that their ten children were to be raised at Rokeby. Most of them grew up to become well known in politics or the arts. John Winthrop Chanler's will provided $20,000 a year for each child for life (equivalent to $470,563 in 2018 dollars), enough to live comfortably by the standards of the time. They included:

As the eldest son, John Armstrong Chanler inherited the property with all its stock, books, pictures, furniture, and personal property, on his twenty-first birthday in 1883, along with $100,000 (equivalent to $2,352,813 in 2018 dollars) for its maintenance, however after his marriage began to disintegrate, he moved to Roanoke Rapids, North Carolina. By agreement of the siblings, Margaret Livingston Chanler bought their shares in the estate during the 1890s. Her grandson Richard Aldrich inherited the estate upon her death in 1963. It is currently owned by the Aldrich family.

The house is currently the home to various artists and writers, including Processional Arts Workshop. It is also the site of the Shoving Leopard organic farm.

It was added to the National Register of Historic Places in 1975.

All content from Kiddle encyclopedia articles (including the article images and facts) can be freely used under Attribution-ShareAlike license, unless stated otherwise. Cite this article:
Rokeby (Barrytown, New York) Facts for Kids. Kiddle Encyclopedia.