Rhinecliff is a hamlet and census-designated place (CDP) located along the Hudson River in the town of Rhinebeck in northern Dutchess County, New York, United States. As of the 2010 census, the population of Rhinecliff was 425.

It was founded in 1686 as the town of Kipsbergen by five Dutchmen, among them Hendrikus and Jacobus Kip, who moved from Kingston to live in the settlement along the eastern shore of the Hudson. In 1849, under the influence of the Hudson River School of painters, the hamlet was given the more picturesque name of "Rhinecliff". The name was borrowed from the original name of the Jones-Schermerhorn estate, now known as "Wyndcliffe". 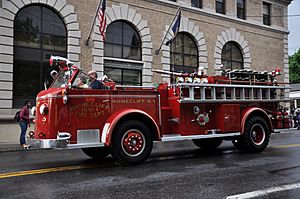 Rhinecliff is located in the western part of the town of Rhinebeck, 1 mile (1.6 km) west of Rhinebeck village. It is directly across the Hudson River from the city of Kingston. The closest river crossing is the Kingston–Rhinecliff Bridge (New York State Route 199), 4 miles (6 km) to the north. According to the U.S. Census Bureau, the Rhinecliff CDP has a total area of 1.0 square mile (2.6 km2), of which 0.02 square miles (0.04 km2), or 1.37%, is water.

Rhinecliff is one of the oldest intact hamlets along the Hudson River and is listed in the National Register of Historic Places as a contributor to the Hudson River National Historic Landmark District. At 20 miles (30 km) long, this historic district is the largest National Historic Landmark (NHL) designation in the country. Rhinecliff is also included in the Local Waterfront Redevelopment Program (LWRP) and is designated a Scenic Area of Statewide Significance (SASS), a contributor to the DEC Mid-Hudson Historic Shorelands Scenic District, a contributor to DEC Scenic Roads designations, and is in the Hudson River National Heritage Corridor. The quaintness and charm of the hamlet serve as the water and rail gateway to the larger town of Rhinebeck.

The hamlet is demarcated by large agricultural and wooded area to the north, east, and south, and bounded by the Hudson River on the west. Steep topography, formed by contorted slate ridges and valleys, define the site-specific and seemingly random orientation of the small, frame nineteenth-century houses and winding narrow roads. After experiencing a mid-nineteenth century building boom, the original hamlet boundaries and building density have changed very little over the last one hundred years.

According to her biographer Louis Auchincloss, Edith Wharton was a frequent childhood visitor who later described the Wyndcliffe mansion as "The Willows" in Hudson River Bracketed. In her autobiography, A Backward Glance (1933), Mrs. Wharton wrote about Wyndcliffe and her aunt.

...But no memories of those years survive, save those I have mentioned, and one other, a good deal dimmer, of going to stay one summer with my Aunt Elizabeth, my father's unmarried sister, who had a house at Rhinebeck-on-the-Hudson. ... I can still remember hating everything at Rhinecliff, which, as I saw, on rediscovering it some years later, was an expensive but dour specimen of Hudson River Gothic; and from the first I was obscurely conscious of a queer resemblance between the granite exterior of Aunt Elizabeth and her grimly comfortable home, between her battlemented caps and the turrets of Rhinecliff...

The town is also the setting of the fictional book series The It Girl by Cecily von Ziegesar.

All content from Kiddle encyclopedia articles (including the article images and facts) can be freely used under Attribution-ShareAlike license, unless stated otherwise. Cite this article:
Rhinecliff, New York Facts for Kids. Kiddle Encyclopedia.