A regional college town, the municipality is home to the University of Vermont (UVM) and Champlain College, a small private college. Vermont's largest hospital, the UVM Medical Center, is located within the city limits. In 2015, Burlington became the first city in the U.S. to run completely on renewable energy.

Two theories have been put forward regarding the origin of Burlington's name. The first is that it was named after Richard Boyle, 3rd Earl of Burlington, and the second is that the name honors the politically prominent and wealthy Burling family of New York. While no Burling family members are listed as grantees of the town, the family held large tracts of land in nearby towns, some of which were granted on the same day as Burlington. 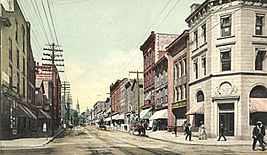 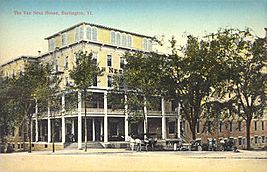 One of the New Hampshire grants, the land that was developed as Burlington was awarded by New Hampshire colonial governor Benning Wentworth on June 7, 1763 to Samuel Willis and 63 others. In the summer of 1775, settlers began clearing land and built two or three log huts, but the outbreak of the American Revolutionary War delayed permanent settlement until after its conclusion. In 1783, Stephen Lawrence arrived with his family. The town was organized in 1785.

The War of 1812 was unpopular in Vermont and New England, which had numerous trading ties with Canada. Neither Vermont nor other New England states provided militia units or financial support. Vermont voters supported the Federalist Party, which opposed the war. At one point during the war, the U.S. had 5,000 troops stationed in Burlington, outnumbering residents and putting a strain on resources. About 500 soldiers died of disease, which was always a problem due to poor sanitation in army camps. Some soldiers were quartered in the main building at the University of Vermont, where a memorial plaque commemorates them.

In a skirmish on August 2, 1813, the British shelled Burlington. Depending on who relates the account, this is described either as a bold stroke by the British with an ineffectual response from the Americans, or a weak sally by the British, properly ignored by the Americans. The cannonade lasted for about 10 minutes and did not affect the outcome of the war. The American side was commanded by Naval Lieutenant Thomas Macdonough, later hero of the Battle of Lake Champlain.

The town's position on Lake Champlain helped it develop into a port of entry and center for trade, particularly after completion of the Champlain Canal in 1823, the Erie Canal in 1825, and the Chambly Canal in 1843. Wharves allowed steamboats to connect freight and passengers with the Rutland & Burlington Railroad and Vermont Central Railroad. Burlington became a bustling lumbering and manufacturing center and was incorporated as a city in 1865. Its Victorian era prosperity left behind much fine architecture, including buildings by Ammi B. Young, H.H. Richardson, and McKim, Mead & White.

In 1870, the waterfront was extended by construction of the Pine Street Barge Canal. This became polluted over the years and was a focus for cleanup in 2009 under the U.S. Environmental Protection Agency's Superfund program.

In 1978, the ice cream enterprise Ben & Jerry's was founded in Burlington in a renovated gas station. It became a national brand, with retail outlets in numerous cities.

In 2007, the city was named one of the top four "places to watch" in the United States by the American Association of Retired Persons (AARP). The ratings were based on what was perceived as ideal qualities for older residents. Criteria included the factors that make a community livable: new urbanism, smart growth, mixed-use development, and easy-living standards.

Forbes magazine ranked the city in 2010 as one of the "prettiest" towns in America, featuring a picture of the Church Street Marketplace on its cover.

Lake Champlain from the Burlington wharves, New York's Adirondack Mountains in the background

Burlington is situated on the eastern shore of Lake Champlain, north of Shelburne Bay. It was built on a strip of land extending about 6 miles (9.7 km) south from the mouth of the Winooski River along the lake shore, and rises from the water's edge to a height of 300 feet (91 m).

A large ravine in what is now downtown was filled in with refuse and raw sewage in the 19th century to make way for further development.

Burlington, as seen from Lake Champlain in 2010

Ethnicity and race as of the 2010 Census:

Burlington is the central focus of Green Mountain Transit (GMT), which provides bus service to and from surrounding municipalities.

On June 15, 2011, the Chittenden County Transportation Authority announced that it had changed its charter, effective July 1, 2011, to allow municipalities outside Chittenden County to join CCTA as member communities, thereby allowing CCTA to become Vermont’s first regional transit authority. As part of its expansion, the CCTA merged with the Green Mountain Transit Authority (GMTA), which provided bus service in the Barre-Montpelier area and surrounding communities in central Vermont. 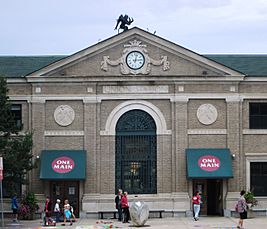 Burlington's Union Station was built in 1916 by the Central Vermont Railway and the Rutland Railroad. It now serves only tourist rail operations.

From the late nineteenth century to 1953, the Rutland Railroad provided passenger service on the Green Mountain Flyer and the Mount Royal from Burlington to Chatham, New York in Columbia County, with connecting service to New York City via the New York Central Railroad. The last train north to run to Alburgh, a town in the northwest extremity of Vermont, was in 1948. From 1916, Rutland Railroad service was provided at the new Union Station on the Lake Champlain waterfront. From 2000 to 2003, the Champlain Flyer was a commuter service from Burlington south to the town of Charlotte, Vermont.

Since the closure of the Champlain Flyer, Burlington has had no active railroad connections. An Amtrak station is located 7 miles (11 km) away in the village of Essex Junction, Vermont.

Air carriers at Burlington International Airport (BTV) provide the area with commercial service to major regional hubs and international airports. While scheduled carriers have not traditionally offered scheduled commercial flights to destinations outside the United States, there is a Customs Port of Entry for unscheduled flights. Since December 2011, the only available international commercial flights for BTV have been via Porter Airlines' winter seasonal service to and from Billy Bishop Airport in Toronto.

Burlington is served by one major Interstate highway, along with its spur route into the southern part of the city, and is at the junction of two U.S. highways. Several Vermont state highways also provide routes into and through the Burlington area.

Burlington is the headquarters of the Lake Champlain Transportation Company, a privately held company that offers ferry service for the North Country of New York state and the Champlain Valley region of Vermont. Summer seasonal service is available from Burlington's King Street Dock to Port Kent, New York. Two lines of year-round 24-hour service are provided from the nearby towns of Grand Isle, Vermont to Plattsburgh, New York and Charlotte, Vermont to Essex, New York.

Burlington's neighborhoods are generally recognized by residents, but have no legal or political authority.

Churches in Burlington include the North Avenue Alliance Church, First Baptist Church, First Congregational Church, the Episcopal Cathedral Church of St. Paul, the First United Methodist Church, Christ Church (Presbyterian), the Roman Catholic Cathedral of the Immaculate Conception – the episcopal see for the Diocese of Burlington – and the Co-Cathedral of St. Joseph, the First Unitarian Universalist Society, the College Street Congregational Church (United Church of Christ), The Burlington Church of Christ, and the non-denominational Church at the Well. The Conservative Ohavi Zedek synagogue is also located in the city, and there is an active Meeting of the Religious Society of Friends (Quakers).

The Howard Mortuary Chapel in Lakeview Cemetery was built in 1882 as a gift to the City of Burlington from Hannah Louisa Howard, a local philanthropist. A native of the city, she was the daughter of John Howard, a successful Burlington hotelier. The chapel was designed in the High Victorian Gothic style by Alfred Benjamin Fisher, on cemetery grounds designed by E. C. Ryer in 1871.

The Ira Allen Chapel on the grounds of the University of Vermont campus, was completed in 1926, and was designed in the Georgian Revival style by McKim, Mead & White. The chapel's flashing beacon provides a nighttime landmark for those approaching Burlington from Lake Champlain. The chapel is part of the University Green Historic District.

Both of the cathedrals in Burlington – the Episcopal Cathedral Church of St. Paul and the Roman Catholic Cathedral of the Immaculate Conception – are modern structures built after their predecessors were destroyed by arson fires in 1971–72. The Episcopal Cathedral was completed in 1973 and was designed by Burlington Associates (now TruexCollins) in the Brutalist style, while the Roman Catholic Cathedral was built in 1974-77 and was designed by Edward Larrabee Barnes, with the park-like grounds designed by landscape architect Dan Kiley.

Dragon boat races to benefit charity have been held in Lake Champlain in August since 2006. In 2009, there were approximately 2,000 participants on 86 teams.

There has been an annual First Night community celebration of the arts on New Year's Eve since 1982. Burlington was the fourth city to embrace this concept.

Burlington's own drag troupe, the House of LeMay, performs several shows a year, hosts the annual "Winter is a Drag Ball," and raises funds for numerous charities. The House of LeMay is the subject of the documentary, "Slingbacks and Syrup" which premiered at the 2008 Vermont International Film Festival in Burlington.

The Emily Post Institute, an etiquette organization, is headquartered here.

The city has, over the years, supported a number of local bands as various "scenes" waxed and waned, and has even launched a handful of national acts. The most famous of these is Phish, which originated at UVM circa 1983.

The "South End Art Hop", is an annual event presented by the South End Arts and Business Association. Artists join businesses, artist studios, and galleries, which in turn open their doors to the public throughout the post-industrial section of Burlington, known as the "South End". The first Art Hop in 1993 had a little more than thirty artists and a dozen sites participating. In 2008, over 600 artists showcased their works in over 100 sites throughout the South End of Burlington. The event takes place on the Friday and Saturday following Labor Day in September.

The city has an arts department, Burlington City Arts, which serves many roles including cultural planning, education, showing contemporary art and hosting cultural events at The BCA Center. Burlington City Arts also runs a program in collaboration with UVM Medical Center, Art from the Heart, where patients have access to art supplies and devoted volunteer time.

Many of Burlington's historic buildings and sites have been recognized by their inclusion on the National Register of Historic Places (NRHP). In addition to 28 buildings, three shipwrecks and the Burlington Breakwater, the city encompasses 17 historic districts. 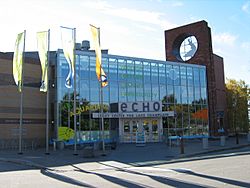 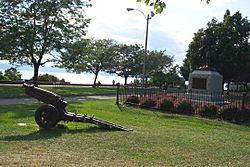 Besides being the least populous U.S. city to be the most populous within its state, Burlington is also home to the shortest "tallest building" in any of the 50 U.S. states, Decker Towers.

The six tallest buildings in Burlington are:

Burlington is twinned with:

All content from Kiddle encyclopedia articles (including the article images and facts) can be freely used under Attribution-ShareAlike license, unless stated otherwise. Cite this article:
Burlington, Vermont Facts for Kids. Kiddle Encyclopedia.