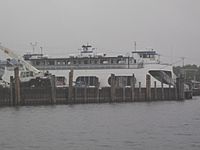 The Lake Champlain Transportation Company (LCTC or just LCT) provides car and passenger ferry service at three points on Lake Champlain in the United States. From 1976 to 2003, it was owned by Burlington, Vermont, businessman Raymond C. Pecor, Jr. who is Chairman of the company's board. In 2003, he sold the company to his son, Raymond Pecor III.

Lake Champlain is the thirteenth-largest lake in the United States, reaching a maximum width of 12 miles (19 km) and depths of more than 300 feet (91 m). As such, there is no bridging of the "broad lake" north of Crown Point, New York, and south of the Rouses Point-Alburg-Swanton crossing near the Canada–United States border, though bridging of the lake near Plattsburgh has been proposed. The ferry service allows convenient transport across the lake between New York and Vermont. Approximately one million passengers cross the lake by ferry each year.

Service was originally provided at three points, listed from south to north:

Most runs employ at least two double-ended diesel ferries, making the crossings in opposite directions. All ferries are capable of carrying large trucks as well as cars, bicycles, and foot passengers and are of a roll-on, roll-off design (although they can operate single-ended in the event of an engine failure). Credit cards are not accepted on some routes. Under the terms of the Maritime Transportation Security Act, vehicles and luggage brought on board some LCT vessels may be subject to search. Most runs are considered quite scenic.

During the summer, the company also provides dinner cruises and charters from Burlington as well as special runs that allow the watching of the Independence Day fireworks display at the Burlington waterfront.

The Charlotte–Essex ferry is run year-round, but may not operate if there is heavy icing on the lake. This became a year-round route in 1998 and has operated year-round all but two winters since.

Until the 1920s when the Champlain Bridge was built, this was the primary route for cross-lake travel.

The Burlington–Port Kent ferry crosses the maximum width of the lake and does not operate in the winter. This crossing takes approximately one hour.

The Grand Isle–Plattsburgh ferry is an ice-breaking route and provides 24-hour service year-round. The crossing on this route takes approximately 12 minutes. In 2001, the company spoke out against a proposed plan to build a bridge that would replace this route. 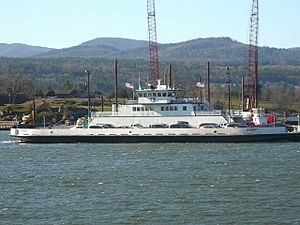 The Vermont running at Crown Point. Cranes for the construction of the new Lake Champlain Bridge in the background, November 2010.

In addition, a temporary ferry operated by the company, for free at the expense of the states of New York and Vermont at a cost to the states of about $10 per car, temporarily operated from Crown Point, New York, to Chimney Point, Vermont. This 20 minute crossing operated 24-hours per day due to the removal of the Champlain Bridge due to structural problems and the construction of a new span.

With the opening of the new Lake Champlain Bridge, this ferry crossing was no longer needed so the service ended as of November 7, 2011.

The ferries used by the LCTC 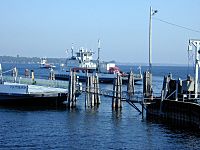 Plattsburgh, Cumberland, and (in the background) EWW

Ferries used by the Lake Champlain Transportation Company, including six vessels that can run in ice:

American Recovery and Reinvestment Act of 2009 grants totalling approximately $600,000 were used under the National Clean Diesel Funding Assistance Program to reduce emissions by the ferries.

From about 1820 to 1850, approximately five horse ferry crossings operated on Lake Champlain.

The Burlington Bay Horse Ferry shipwreck discovered in 1983 in Lake Champlain is an example of a turntable team boat. "Horse-powered ferries like the one sunk in the Bay of Burlington, Vermont, had reached their heyday in the 1830s and 1840s. Eventually, in the 1850s, the steam boat took over and the days of horse-powered ferries quickly came to an end."

A brief history of the vessels owned by the Lake Champlain Transportation Co. from 1948–2010 is available online. 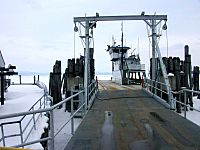 EWW sitting in the Grand Isle slip during ice-breaking season 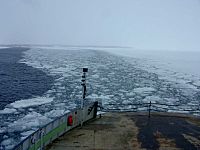 EWW moving west through the icy channel towards Plattsburgh 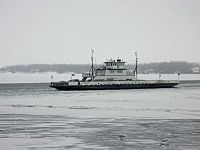 During the winter, Lake Champlain sometimes ices over, making ferry service on the long Burlington-Port Kent route impractical. The Grand Isle-Cumberland Head route is short enough to maintain an open channel, and the distance to the Rouses Point bridge makes it practical for substantial motor traffic to use the ferry, justifying the difficulty of keeping the ferry service operating. The ferries used on this run are of the ice-breaking type; their hulls and propellers are reinforced to allow the boats to operate through thin or broken ice. By operating continuously, the ferries maintain an open channel throughout the winter ice season.

In the past, the ferries did not operate around the clock, but in winter time, a few runs were made through the night to prevent the ice from freezing solidly. Now, scheduled runs continue throughout the night.

Lake Champlain Transportation is the largest contributor to the Pecor Family Foundation, contributing over $250,000 in the tax years 2006–2008. The foundation makes large contributions to such charities as the American Cancer Society and United Way, and to educational institutions such as the University of Vermont and Champlain College.

All content from Kiddle encyclopedia articles (including the article images and facts) can be freely used under Attribution-ShareAlike license, unless stated otherwise. Cite this article:
Lake Champlain Transportation Company Facts for Kids. Kiddle Encyclopedia.