Crown Point is a town in Essex County, New York, United States, located on the west shore of Lake Champlain. The population was 2,024 at the 2010 census. The name of the town is a direct translation of the original French name, Pointe à la Chevelure.

Two European forts were built here by colonists because of its strategic location at the narrows of Lake Champlain. The forts preceded organization of the town by more than half a century: first was Fort Saint-Frédéric built by the French in 1731, who came to this area from their colonial settlements to the north at Quebec and Montreal. They competed with the British for the fur trade with Native Americans in the area.

During the Seven Years' War (known as the French and Indian War in North America), the British gained control of this area. Before that, the French retreated and destroyed their fort to keep it out of the hands of the British. The latter built Fort Crown Point in 1759, then the largest earthen fort in their colonies. With British victory in the war, after 1763 France ceded all its territory in North America east of the Mississippi River to Britain.

During colonial times and the American Revolutionary War, Crown Point continued to be important for its strategic location - on the west shore of Lake Champlain about 15 miles (24 km) north of Fort Ticonderoga, about a day's travel by the modes of that time period. After the failure of the patriot American invasion of Canada in 1776, Crown Point represented the northernmost area under American control. During the British Saratoga campaign in 1777, General John Burgoyne organized a supply magazine here to support his attack of Ticonderoga.

Crown Point is an original town of the county, established in 1786 following the Revolution and before the organization of Essex County. Parts of Crown Point were later drawn off to form the towns of Elizabethtown (1798) and Willsboro (1788). The modern European-American settlement of the town began around 1800 with an influx of settlers from Vermont. 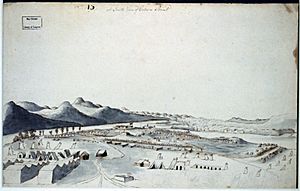 A south view of Crown Point 1760 by Thomas Davies

The east town line, defined by Lake Champlain, is the border of Vermont (Addison County). The Champlain Bridge (Route 17) connected Crown Point to Vermont until 2009, when the bridge was demolished as unsafe. A temporary ferry service, operated by the Lake Champlain Transportation Company and funded by the states of New York and Vermont, provided access from Crown Point to Vermont from late 2009 until late 2011. The new bridge at Crown Point, scheduled to open in August 2011, opened to traffic that November.

The town of Crown Point lies entirely within the Adirondack Park.

There were 797 households, out of which 33.9% had children under the age of 18 living with them, 58.2% were married couples living together, 8.3% had a female householder with no husband present, and 27.4% were non-families. 21.3% of all households were made up of individuals, and 9.8% had someone living alone who was 65 years of age or older. The average household size was 2.64 and the average family size was 3.06.

Communities and locations in Crown Point 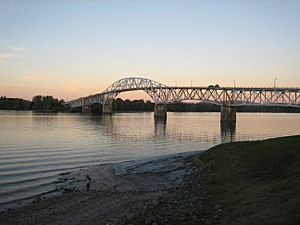 The former bridge at Crown Point

All content from Kiddle encyclopedia articles (including the article images and facts) can be freely used under Attribution-ShareAlike license, unless stated otherwise. Cite this article:
Crown Point, New York Facts for Kids. Kiddle Encyclopedia.