Elizabethtown is a town in Essex County, New York, United States. The population was 1,163 at the 2010 census. The county seat of Essex County is the hamlet of Elizabethtown, located in the northern part of the town. The name is derived from Elizabeth Gilliland, the wife of an early settler.

Elizabethtown is in the east-central part of Essex County. It is 39 miles (63 km) southwest of Burlington, Vermont, 104 miles (167 km) south of Montreal, Quebec, and 117 miles (188 km) north of Albany. The town calls itself the "Pleasant Valley". 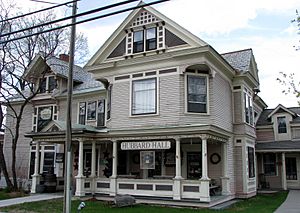 William Gilliland, an investor, bought up large tracts of land in Essex County. The town was first settled around 1792 near New Russia.

The lumber industry and processing iron ore were important in the beginning, but tourism became prominent by the end of the 19th century.

The Hand-Hale Historic District and Hubbard Hall are listed on the National Register of Historic Places.

The Black River, a north-flowing tributary of the Boquet River, marks part of the eastern town line.

Interstate 87, the Northway, is a major divided highway passing through the southeast part of Elizabethtown. There are no exits within the town limits; the closest access is from Exit 30 (US 9) just to the south in North Hudson and from Exit 31 (NY 9N) just to the east in Westport. U.S. Route 9 is a north-south highway. New York State Route 9N is an east-west highway, which intersects U.S. Route 9 in downtown Elizabethtown.

There were 497 households, out of which 30.8% had children under the age of 18 living with them, 51.7% were married couples living together, 8.5% had a female householder with no husband present, and 36.0% were non-families. 31.4% of all households were made up of individuals, and 16.7% had someone living alone who was 65 years of age or older. The average household size was 2.32 and the average family size was 2.92.

Communities and locations in Elizabethtown 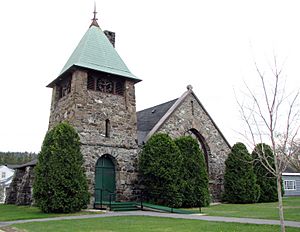 All content from Kiddle encyclopedia articles (including the article images and facts) can be freely used under Attribution-ShareAlike license, unless stated otherwise. Cite this article:
Elizabethtown, New York Facts for Kids. Kiddle Encyclopedia.