Keene is a town in central Essex County, New York, United States. It includes the hamlets of Keene, Keene Valley, and St. Huberts, with a total population of 1,144 as of the 2020 census

The earliest settlement in the present village of Keene Center was in 1787. The town of Keene was created from splitting parts of the towns of Jay and Elizabethtown on March 19, 1808. This originally included current North Elba, but that was split in 1848 from the original Keene. The area was made of a mountainous and rocky surface, with a low population due to the unstable soil in the region. A nearby highway was extended to Keene Center via the towns of Lewis and Jay, but it was deemed unusable due to the structure of the area. The town of Keene organized the first school district in the Adirondacks, which held its first recorded trustee meeting in 1813.

The area had been a stronghold with the lumber and iron industries. However, exporting items made by these industries was difficult due to lack of transportation. By around 1820 sawmills, forges and gristmills were being built. The riverbed region of Keene sprouted the first community, and Keene Flats become another by 1840. In 1882, when the Adirondack Park was created as a state protected area, a privately tolled and maintained road to lower Ausable Lake was constructed.

In 2011, the town completed a grassroots project to bring broadband service to more than 97% of the homes in Keene, and installing the service in every home with a student in the town's public school. The extension of this network into rural areas makes it unique in the Adirondack Park.

The Hurricane Mountain Fire Observation Station and Walton Bridge are listed on the National Register of Historic Places. 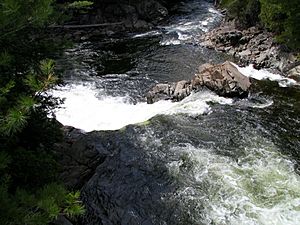 Many of the High Peaks of the Adirondack Park are in or near the town, including Mount Marcy, elevation 5,343 feet (1,629 m), the highest point in New York. The Garden, one of the most popular trailheads in the Adirondacks, is located in the hamlet of Keene Valley and is the eastern end of the Johns Brook Trail, leading to Johns Brook Lodge, Mount Marcy, and the heart of the High Peaks Region.

The East Branch of the Ausable River passes through the hamlets of Keene and Keene Valley, and Hull Falls near Keene is an attractive view.

There were 443 households, out of which 29.6% had children under the age of 18 living with them, 53.0% were married couples living together, 6.3% had a female householder with no husband present, and 37.0% were non-families. Of all households, 31.4% were made up of individuals, and 13.5% had someone living alone who was 65 years of age or older. The average household size was 2.30 and the average family size was 2.90. 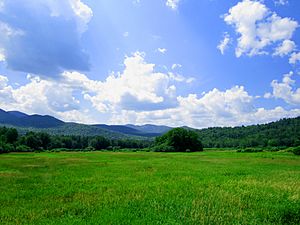 Communities and locations in Keene 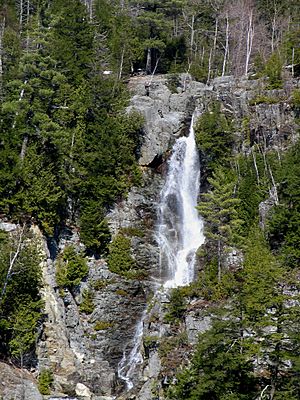 This article incorporates text from a work in the public domain:

All content from Kiddle encyclopedia articles (including the article images and facts) can be freely used under Attribution-ShareAlike license, unless stated otherwise. Cite this article:
Keene, New York Facts for Kids. Kiddle Encyclopedia.