The Ausable Club, in St. Huberts, New York, is the name of a club and the clubhouse of the Adirondack Mountain Reserve (AMR), which upon the initiative of William George Neilson, formed in 1887 to save the lands around Beede's Hotel from the lumber industry. The Reserve once owned most of the Adirondack High Peaks. The club is also the home of the Adirondack Trail Improvement Society, known as A.T.I.S, which developed and still maintains many of the trails to the high peaks. The clubhouse property, also known as St. Hubert's Inn, Beede House, or Beede Heights Hotel, is listed on the National Register of Historic Places. 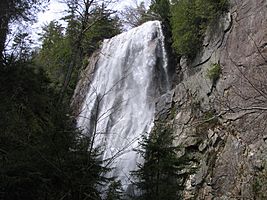 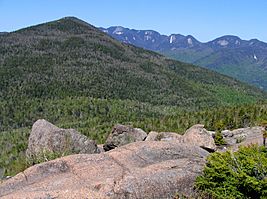 Noonmark from Round Mountain, showing the Great Range from Gothics to Lower Wolfjaw Mountain, all reachable via AMR lands

The present clubhouse sits on the 600-acre (240 ha) site of Beede's Hotel, built in 1876. Beede's was one of the first of the Adirondack hotels to cater to wealthy sportsmen eager to escape city life during the summer, a phenomenon that predated the Civil War, but that was greatly accelerated by advances in transportation offered by steam ships and railroads. Beede's was notorious for its austere accommodations, but no less famous for its setting near Upper and Lower Ausable Lakes and the Ausable River, and for its views of Giant and Noonmark Mountains, Sawteeth and Mount Colvin. Guides were available to lead parties up the rocky ravine of the Ausable to lean-to shelters on the lakes, and thence to the high peaks above.

When it became known that the woods around Beede's was going to be timbered by the lumber company which owned them, a prominent Philadelphia mining engineer and summer resident William G. Neilson, secured a two-month option on the property dated September 20, 1886. Neilson approached several friends to join in the purchase of 25,000 acres (100 km2), including the two lakes and nearby mountains. By December 1, 1886, William Neilson, William Alderson, George Burnham, Charles Hinchman, J.W. Fuller, Richard Dale and Edward Howell successfully raised the down payment to secure a two-year warranty deed which was signed by Neilson and Alderson. By October 1887, twenty-nine stockholders had formed a corporation, the Adirondack Mountain Reserve. Although the Reserve prohibited hunting and camping, the land remained open to the public for hiking. The AMR added to its holdings, reaching a peak of 40,000 acres (16,000 ha) in 1910. However, in 1933 and again in 1978, land was sold to the state of New York as part of the Adirondack Park, so that present holdings amount to about 7,000 acres (2,800 ha).

In 1890, the owners of the Reserve formed the Keene Heights Hotel Company, with a plan to purchase Beede's Hotel, but the building burned to the ground in March. Philadelphia architectural firm Wilson Brothers & Company was hired to design St. Hubert's Inn, and four months later the new hotel was opened in the present structure. However, by 1904, the venture proved unprofitable, and was closed. The following year, the AMR's owners formed the Ausable Club, and purchased the hotel property as a clubhouse.

The clubhouse is a 3+1⁄2-story clapboard building with sparing use of Queen Anne details, arranged in two long blocks joined at a 22.5 degree angle where a large 3-story octagonal porch provides sheltered access to the surrounding views. In addition, a porch runs the full length of the first floor. Protected by its status as a clubhouse, the building has suffered remarkably little change, inside or out, since it was built.

All content from Kiddle encyclopedia articles (including the article images and facts) can be freely used under Attribution-ShareAlike license, unless stated otherwise. Cite this article:
Ausable Club Facts for Kids. Kiddle Encyclopedia.