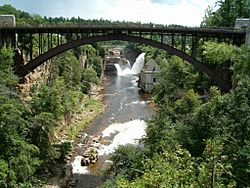 It was originally named "Au Sable" (French for "sandy") by Samuel de Champlain when he first explored the region in 1609 because of its extensive sandy delta. 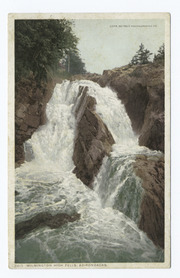 The East Branch arises from Upper and Lower Ausable lakes in the Ausable Valley, which forms the south side of the Great Range. The first 4 miles (6 km) are especially scenic, and can be viewed from trails on either side maintained by the Adirondack Trail Improvement Society. The river is then met by the Cascade Brook which flows from the Cascade Lakes, beneath Cascade Mountain, on its way to Au Sable Forks.

All content from Kiddle encyclopedia articles (including the article images and facts) can be freely used under Attribution-ShareAlike license, unless stated otherwise. Cite this article:
Ausable River (New York) Facts for Kids. Kiddle Encyclopedia.