Clinton County is a county in the north-easternmost corner of the state of New York, in the United States and bordered by the Canadian province of Quebec. As of the 2010 United States Census, the population was 82,128. Its county seat is the city of Plattsburgh. The county lies just south of the border with the Canadian province of Quebec and to the west of the State of Vermont.

The county is named for George Clinton, the first Governor of New York, who later was elected as Vice President. He had been a Founding Father who represented New York in the Continental Congress. 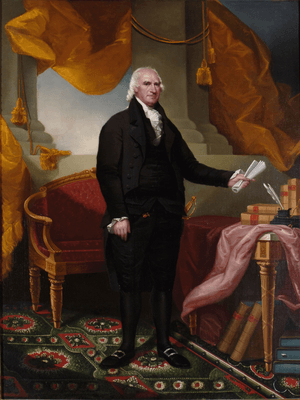 When counties were established in New York State in 1683, the present Clinton County was part of Albany County. This was an enormous county, including the northern part of New York State as well as all of the present state of Vermont and, in theory, extending westward to the Pacific Ocean. This county was reduced in size on July 3, 1766, by the creation of Cumberland County, and further on March 16, 1770, by the creation of Gloucester County, both containing territory now in Vermont. On March 12, 1772, what was left of Albany County was split into three parts, one remaining under the name Albany County. One of the other pieces, Charlotte County, contained the eastern portion.

In 1799, Essex County was split off from Clinton County.

In 1802, parts of Clinton, Herkimer, and Montgomery counties were taken to form the new St. Lawrence County.

In 1808, Franklin County was split off from Clinton County.

Clinton County is in the northeastern part of the State of New York, west of Vermont and south of the Canadian province of Quebec. The eastern boundary of Clinton County is Lake Champlain, which serves as the New York-Vermont border. Because of this, the encompassing region is referred to as the Adirondack Coast. The Ausable River forms a large part of the south county line.

The southwest part of the county is in the Adirondack Park.

All content from Kiddle encyclopedia articles (including the article images and facts) can be freely used under Attribution-ShareAlike license, unless stated otherwise. Cite this article:
Clinton County, New York Facts for Kids. Kiddle Encyclopedia.