Keeseville is a hamlet (and census-designated place) in Clinton and Essex counties, New York, United States. The population was 1,815 at the 2010 census. The hamlet was named after the Keese family, early settlers from Vermont. It developed along the Ausable River, which provided water power for mills and industrial development.

Keeseville is in the towns of Au Sable and Chesterfield and is south of the city of Plattsburgh. It is located inside what are now the boundaries of Adirondack Park, which was authorized in the 20th century.

On January 23, 2013, the town's selectboard voted to dissolve the village. As of 2016, the U.S. Census Bureau still had Keeseville listed as a village.

The hamlet was originally called "Anderson Falls", but the name was changed circa 1812 to "Keeseville", after a local manufacturer and businessman. The early hamlet was an industrial area devoted, in part, to lumber, iron processing and milling.

In January 2013, voters decided in a referendum by a vote of 268-176 to dissolve the village and revert to the two bordering towns in which it is located. The village officially dissolved on December 31, 2014.

There were 706 households, out of which 34.4% had children under the age of 18 living with them, 48.7% were married couples living together, 13.6% had a female householder with no husband present, and 32.4% were non-families. 24.9% of all households were made up of individuals, and 11.0% had someone living alone who was 65 years of age or older. The average household size was 2.57 and the average family size was 3.04. 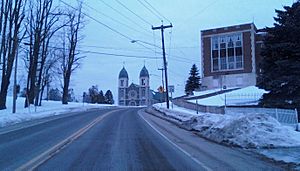 Keeseville is the birthplace of William Henry Jackson, born April 4, 1843, who became a renowned photographer of the frontier and the Civil War. He also was known as an accomplished American painter.

Jackson was an explorer and photographer who accompanied various geologic surveys of the time. His photographs of the American frontier are famous, and his glass negatives are held in museums around the United States. Jackson joined the U.S. Army in 1862 and was present at the Battle of Gettysburg.

Architect Isaac G. Perry also lived in Keeseville. He was active in upstate New York, designing churches and public buildings in the late 19th century that have been listed on the National Register of Historic Places.

All content from Kiddle encyclopedia articles (including the article images and facts) can be freely used under Attribution-ShareAlike license, unless stated otherwise. Cite this article:
Keeseville, New York Facts for Kids. Kiddle Encyclopedia.