The city of Plattsburgh is within the boundaries of the original "Town of Plattsburgh" and is in the North Country region of the state of New York.

Beginning with Samuel de Champlain's expedition into the Lake Champlain valley in 1609, the Plattsburgh region began to come under the French influence, later passing under English and finally American control. The early French contact and its closeness to Quebec made this a historically French area. Located in the extended fur trade network in the Montreal hinterland, the Plattsburgh area was the realm of the coureur des bois who served the larger trading hub in Montreal. Although Plattsburgh is a relatively new city, the surrounding area was settled during the mid-to-late 17th century. Permanent French settlement was hampered by the threat of conflict with the Iroquois, but French missionaries began living among the indigenous population as early as 1609. Moreover, the area near Plattsburgh is notable for being the site of an indigenous village.

Transition to British and then American rule

Plattsburgh and much of the lands comprising present day Clinton County were originally part of the French settlement of New France. They stayed a part of New France until the outcome of the French and Indian War, where the French lost their hold on this region to the British. This conflict (1754–1763) predated the American Revolution (1775–1783). As a condition of the 1763 Treaty of Paris, a vast region including present-day Plattsburgh was ceded from France to Britain. It was incorporated into British rule as part of the Indian Reserve. The Reserve was established by Britain as an attempt to protect British colonial positions in New England and the Middle Colonies using the newly acquired lands to buffer against armed conflict with either France or Spain. The founding of present-day Plattsburgh, however, was not an act of the British, rather it coincided with the American territorial acquisition after the American Revolutionary War; ended as per the agreement between the newly established United States of America and Great Britain via the 1783 Treaty of Paris.

Plattsburgh was founded by Zephaniah Platt in 1785 after he was granted the land by George Clinton. In granting land to Zephaniah Platt of Poughkeepsie, New York - who went on to establish the new city of Plattsburgh to buffer emerging American interests in the Saint Lawrence River valley and Lake Champlain valley after the American victory in the American Revolutionary War - the centralized American authority proclaimed the area including and surrounding the old French trading areas and Iroquois settlement to be refounded as the settlement of Plattsburgh in 1785.

Regardless, local residents exercised their unique French culture and history over the years in ways still visible today. In Plattsburgh, for example, there is no "Main Street" - a common vestige of English colonies, whereas in a unique tradition major streets and thoroughfares were named after the daughters of prominent businessman and politicians (e.g., Catherine, Margaret, present day North Catherine and South Catherine Streets, and Plattsburgh's "Main Street", Cornelia St.). In a similar fashion, local residents named local streets after renowned Frenchmen including Samuel de Champlain, the region's founder, and General Louis-Joseph de Montcalm - the French general who gained fame defeating incredible numerical odds in battles throughout the Oswego and Hudson River Valley areas before going on to organize the last French defense of Québec at the Battle of the Plains of Abraham. The oldest monument within the city limits is dedicated to Samuel de Champlain.

Plattsburgh Normal School was founded in 1889. It burned in 1929, and was forced to relocate to City Hall for three years. In 1932 the college moved into the current Hawkins Hall which became the base of the modern campus. In 1948 it became State University of New York at Plattsburgh.

In 1915, the Preparedness Movement established the first and best-known of its training camps for prospective military volunteers at Plattsburgh. The "Plattsburgh camps" trained about 40,000 potential Army officers in the summers of 1915 and 1916.

During the Cold War, military functions took a prominent role in Plattsburgh, which was home to Plattsburgh Air Force Base (PAFB) and was the location of the Strategic Air Command's primary wing on the U.S. East Coast due to its geographic desirability. The base's location in the Champlain Valley (protected by the rain shadow of the Adirondack Mountains) ensured consistent, year-round weather that was safe for take-offs and landings. The 380th Bombardment, Aerospace, and Refueling Wings, all stationed at PAFB, included B-52 Bombers, air-refueling "tankers" and FB-111s. The base had a great deal of land surface and was one of only four military bases in the United States with a landing strip large enough for a Space Shuttle landing. 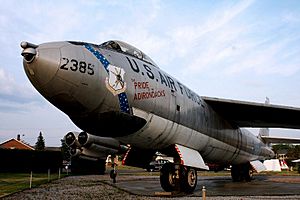 A B-47 bomber with the inscription "Pride of the Adirondacks", one of two aircraft on display in the Clyde A. Lewis Air Park.

On September 1, 1961, the 556 Strategic Missile Squadron was activated at Plattsburgh AFB. The Squadron consisted of 12 Atlas "F" Intercontinental Ballistic Missiles stored in underground silos at 12 sites surrounding the city of Plattsburgh. Ten of the silos were in New York, two across Lake Champlain in Vermont. The squadron played an active role in the 1962 Cuban Missile crisis, giving President Kennedy a powerful negotiating tool in dealing with Nikita Khrushchev. The 556 SMS's life was relatively short lived since the Atlas was a liquid fuel system that was expensive and difficult to maintain. As the solid fuel Minuteman ICBM began to come on line, the liquid fueled missiles such as the Atlas and Titan were retired. The 556 SMS began inactivating in the spring of 1965, completing that task later that year.

Despite its numerous awards for performance excellence, PAFB was closed on September 29, 1995 in a round of national base closures in the early 1990s as the Air Force began to pare down its post-Cold War missions. The base property is now managed by the Plattsburgh Airbase Redevelopment Corporation (PARC) and is used by a number of industrial manufacturers and commercial airlines.

Throughout much of the 1980s, when the Canadian dollar was strong relative to the U.S. dollar, Plattsburgh was a favorite tourist location for vacationers from Montreal and southern Quebec. Bilingual signs, in English and French, are found in parts of the city. The city beaches and camp grounds were regularly crowded and Plattsburgh attracted enough retail stores and outlets to build a second large indoor shopping mall, Champlain Centre North, in addition to several outdoor shopping centers. The additional retail space of the Champlain Centre North along with the new Consumer Square (Walmart, Staples, TJ Maxx...) made the Pyramid Mall irrelevant; it was largely demolished (with exception of Kmart and the restored old Price Chopper building) and converted into a power center with a 115,000 sq ft (10,700 m2) Lowes Home Center and a new Price Chopper as the anchor stores. Today, the city relies largely in part on new industries expanding on the former airbase as well as established manufacturing plants, such as Bombardier, Nova Bus, and Georgia-Pacific paper plant. The GP plant is housed in the former LOZIER Auto factory built in the early 20th century on the former (lakefront) Anderson Farm.

The City of Plattsburgh was the first city in the state to elect an openly gay mayor when they elected Daniel Stewart in 1999.

Plattsburgh is sometimes mistakenly spelled as Plattsburg, leaving off the ‹h›. Adding to the confusion are many historic documents relating to the famous naval engagement between the United States and Britain in 1814 which refer to the Battle of Plattsburg. As a result, some history has been written using the latter spelling. For example, historian and former president of the Society of the War of 1812 in Illinois, John Meloy Stahl published in 1918 "The Battle of Plattsburg: A Study in and of The War of 1812."

Compounding the confusion, in 1950 the editor of the New York State Legislative Manual, seeking to simplify the organization of that year's manual, requested a listing of state post offices from the United States Postal Service. Upon review of the listing, the difference in spelling was noted. The City was contacted and an investigation begun by postal authorities.

To this day, some signs (including US and Canadian highway signs and a sign at the Plattsburgh (Amtrak station), among others) erroneously point the way to "Plattsburg". There is also a bank with plattsburg bank inscribed at the top. 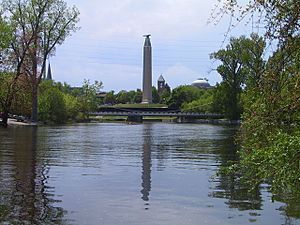 Plattsburgh is on the western shore of Lake Champlain in the northeastern part of the state of New York, just south of Cumberland Head.

The Saranac River flows through the city into Lake Champlain.

The Northway, Interstate 87 is a north-south major highway west of the city. US 9 and NY 22 are additional highways traversing the city from north to south. NY 3, NY 190, and NY 374 approach the city from the west.

Plattsburgh International Airport, Montreal's NY Airport, has attracted bargain seekers from Canada seeking cheap fares to Florida, the sole major airline is Allegiant Air Lines of Las Vegas. These travelers rarely venture into the city, but instead seek out the Route 3 Corridor to occupy their time. 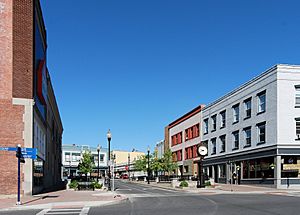 There were 7,600 households out of which 22.3% had children under the age of 18 living with them, 31.1% were married couples living together, 11.4% had a female householder with no husband present, and 54.3% were non-families. 40.4% of all households were made up of individuals and 13.5% had someone living alone who was 65 years of age or older. The average household size was 2.10 and the average family size was 2.83.

Plattsburgh is about a 60-minute drive from Montreal, Quebec. Many people commute across the United States-Canada border, and the city advertises itself as "Montreal's U.S. suburb". New York state is Quebec's largest trade partner, with about $6 billion in trade annually. The proximity leads to Plattsburgh's prominence as a large trade center for a city its size. 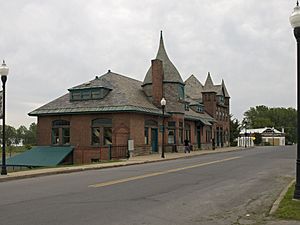 Amtrak, the national passenger rail system, provides service to Plattsburgh, operating its Adirondack daily in both directions between Montreal and New York City.

The closest American city larger than Plattsburgh is Burlington, Vermont, reachable via ferry or a bridge further north at Rouses Point. Ferry service is provided at Cumberland Head heading to Grand Isle by the Lake Champlain Transportation Company. There is also a seasonal ferry service offered by the same company in Port Kent, about 10 miles to the south. The latter ferry goes to Burlington, Vermont.

Plattsburgh International Airport uses the runway of the former Plattsburgh Air Force Base, which closed in 1995. The airport terminal was completed in February 2007 with the building being dedicated on April 27, 2007.

Cargo flights are offered by FedEx Feeder which delivers goods to more major airports aboard Cessna Caravans to be shipped on long haul flights and UPS which does similar service using ATR-72 turboprop aircraft.

The city is serviced by the Clinton County Public Transportation, or CCPT for short. The county-wide bus service offers passengers city and county-wide bus routes, allowing passengers from surrounding communities to travel to and from Plattsburgh. These routes operate five days a week, with a citywide shopping shuttle offered on Saturdays. There is no bus service on Sundays or major holidays.

The movie Frozen River was filmed in Plattsburgh and surrounding areas.

In September, 2011, the British/Irish band One Direction filmed part of their music video "Gotta Be You" on the SUNY Plattsburgh Campus.

In the Mad Men season 5 episode, "Far Away Places", Don and Megan Draper purportedly visit Howard Johnson's Restaurant and Motor Lodge in Plattsburgh, but the exteriors were shot in Baldwin Park, California.

All content from Kiddle encyclopedia articles (including the article images and facts) can be freely used under Attribution-ShareAlike license, unless stated otherwise. Cite this article:
Plattsburgh (city), New York Facts for Kids. Kiddle Encyclopedia.