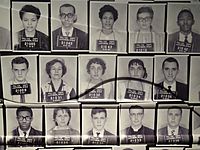 Some of the riders

The Southern states had ignored the rulings and the federal government did nothing to enforce them. The first Freedom Ride left Washington, D.C. on May 4, 1961, and was scheduled to arrive in New Orleans on May 17.

Southern local and state police considered the actions of the Freedom Riders to be criminal and arrested them in some locations. In some places, such as Birmingham, Alabama, the police worked with the Ku Klux Klan and other white people against the actions of the riders, and allowed mobs to attack the riders.

All content from Kiddle encyclopedia articles (including the article images and facts) can be freely used under Attribution-ShareAlike license, unless stated otherwise. Cite this article:
Freedom Riders Facts for Kids. Kiddle Encyclopedia.