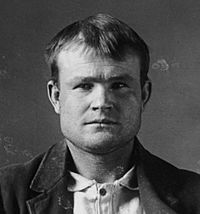 Mugshot of the well-known outlaw Butch Cassidy. This was taken when he was put in jail in 1894.

A mug shot, or booking photograph, is a photographic portrait taken after someone is arrested. The mug shot is taken to allow law enforcement to have a photographic record of the arrested person to allow for identification by victims and investigators. Most mug shots are two-part, with one side-view photo, and one front-view.

All content from Kiddle encyclopedia articles (including the article images and facts) can be freely used under Attribution-ShareAlike license, unless stated otherwise. Cite this article:
Mug shot Facts for Kids. Kiddle Encyclopedia.