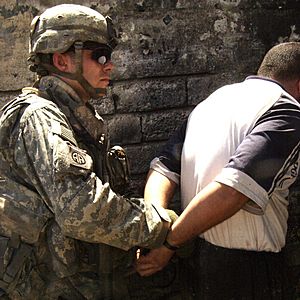 A United States Army soldier arrests a man in June 2007, during the Iraq War

An arrest is when a person's liberty is removed. This is usually done after an investigation of a crime or in stopping a crime from taking place. The term comes from Anglo-Norman. It is related to the French word arrêt, which means "stop".

Police and some other organisations are allowed to arrest people. In some places, normal people can arrest others. For example, in England and Wales, any person can arrest "anyone whom he has reasonable grounds for suspecting to be committing, have committed or be guilty of committing an indictable offence", which means that anyone can arrest another person when they have a good reason for thinking the other person has committed a crime. However, certain conditions must be met before this can be done.

The word "arrest" comes from Anglo-Norman. It is taken from the French word arrêt. Arrêt means 'to stop or stay'. There are many slang terms for being arrested in different countries. In British slang, the term "nicked" is often used to mean "arrested", and "nick" can also mean a police station. In the United States and France, "collared" is sometimes used. The term "lifted" is also used.

The way arrest is done

When there is a good reason to think someone has committed a serious crime, the police usually handcuff an arrested person. The person will be taken to a police station or jail. There, they can be bailed or have their charge read out to them and asked how they plead. This is called an arraignment.

Indian law says that arrests do not need to be formal. The arrest can be made by a normal citizen, a police officer or a Magistrate. The police officer needs to tell the person who is being arrested what they did wrong and that they can be let go on bail if the crime allows people to be bailed.

In the United Kingdom a person must be told that they are under arrest. They must also be told, in simple language that they can understand, the reasons for their arrest. A person must be 'cautioned' when they are arrested unless this can not be done, for example if the person being arrested is being violent or is drunk. The caution given in England and Wales is:

You do not have to say anything, but it may harm your defence if you do not mention when questioned something which you later rely on in court. Anything you do say may be given in evidence.

This exact wording is not needed as long as the same information is given.

All content from Kiddle encyclopedia articles (including the article images and facts) can be freely used under Attribution-ShareAlike license, unless stated otherwise. Cite this article:
Arrest Facts for Kids. Kiddle Encyclopedia.