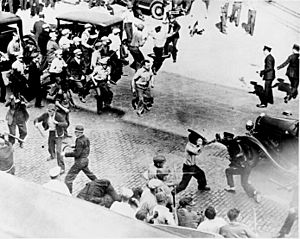 Teamsters, armed with pipes, riot in a clash with riot police in the Minneapolis Teamsters Strike of 1934

Riots happen when many people meet to be violent. This can happen after sports events, demonstrations or as a protest. The state wants to stop riots, because rioters damage cars, buildings and attack people. The police are used to stop riots. They use shields, and fight with soft weapons, for example with water cannons or rubber bullets, as well as with batons.

There have been many riots all over the world, especially in England, Northern Ireland, the United States, India, Pakistan, Bangladesh, Australia and France.

All content from Kiddle encyclopedia articles (including the article images and facts) can be freely used under Attribution-ShareAlike license, unless stated otherwise. Cite this article:
Riot Facts for Kids. Kiddle Encyclopedia.