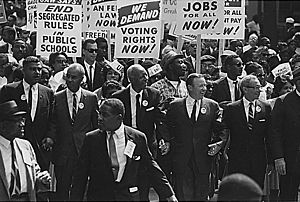 A demonstration can mean an event where people do something to let others know what they think and to try to change their point of view. It is one kind of protest. Examples of demonstrations include marches, where people walk together, and rallies, where people gather in one place. During a demonstration, the people who are part of it, called demonstrators, may display placards or other symbols that are easy to see, especially when the protests are being shown on mass media such as news, television, or social networks.

Demonstrations are often made against a government if they do something the people do not want. Because they are meant for many people to be a part of, they are usually considered more successful if more people take part. Demonstration is permitted by international human rights law as the freedom of assembly if done peacefully (meaning there is no violence). However, demonstrations can get out of control and even turn into a riot.

All content from Kiddle encyclopedia articles (including the article images and facts) can be freely used under Attribution-ShareAlike license, unless stated otherwise. Cite this article:
Demonstration Facts for Kids. Kiddle Encyclopedia.