McComb is a city in Pike County, Mississippi, United States, approximately 80 miles (130 km) south of Jackson. As of the 2010 census, the city had a total population of 13,644. It is the principal city of the McComb, Mississippi Micropolitan Statistical Area. 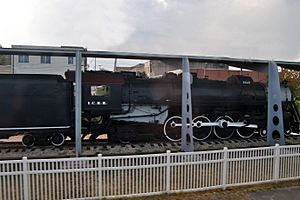 A steam locomotive on display in McComb

McComb was founded in 1872 after Henry Simpson McComb of the New Orleans, Jackson and Great Northern Railroad, a predecessor of the Illinois Central Railroad (now part of the Canadian National Railway), decided to move the railroad's maintenance shops away from New Orleans, Louisiana, outside of the attractions of that city's saloons. Main Street has the downtown's shops, attractions, and business. The railroad purchased land in Pike County, and three nearby communities, Elizabethtown, Burglund, and Harveytown, agreed to consolidate to form this town.

The rail center in McComb was one of flashpoints in the violent Illinois Central shopmen's strike of 1911. The city saw riots, many injuries, at least three black strikebreakers killed, and the emergency insertion of state militia soon after the strike started on September 30.

During the 1960s, McComb and nearby areas were the site of extreme violence by KKK and other opponents to the Civil Rights Movement. In 1961, it was the location of SNCC's first voter registration project in the state, which was quickly met with violence and intimidation by authorities and local KKK. Fifteen-year-old Brenda Travis was expelled from high school for being in a sit-in at an all-white luncheonette and ordering a hamburger; she was sentenced to a year in a juvenile facility. In addition to physical attacks on activists, Herbert Lee, a member of the NAACP, was murdered in front of witnesses in nearby Liberty, Mississippi, by state representative E.H. Hurst, who was exonerated by an all-white coroner's jury. More than 100 black high school students in McComb were arrested in 1961 for protesting his murder. After severe beatings of staff, SNCC pulled out of the region in early 1962, moving north in Mississippi to work in slightly less dangerous conditions. In January 1964, Louis Allen was murdered in Liberty, Mississippi; a witness to Lee's murder, he had been suspected of talking to Department of Justice officials about it.

The song, "We Shall Never Turn Back," was related to the 1961 events in Amite and Pike counties. One verse said: "We have hung our heads and cried, Cried for those like Lee who died, Died for you and he died for me, Died for the cause of equality, But we'll never turn back..."

In 1964, civil rights activists began the Mississippi Project and what would be called Freedom Summer, returning to southwest Mississippi. They sang, "We Shall Never Turn Back." SNCC members of the Council of Federated Organizations (COFO) returned to McComb in mid-July, 1964 to work on voter registration. From late August 1964 through September, after passage of the Civil Rights Act of 1964, McComb was the setting for eleven bombings directed against African Americans. Malcolm Boyd took part of COFO's Freedom House as a member of a clerical delegation to assist African-American voter registration. The following summer, Congress passed the Voting Rights Act of 1965 and African Americans began to be able to register and vote again in the South. In Mississippi, most had been disenfranchised since 1890.

The climate in this area is characterized by hot, humid summers and generally mild to cool winters. According to the Köppen Climate Classification system, McComb has a humid subtropical climate, abbreviated "Cfa" on climate maps.

All content from Kiddle encyclopedia articles (including the article images and facts) can be freely used under Attribution-ShareAlike license, unless stated otherwise. Cite this article:
McComb, Mississippi Facts for Kids. Kiddle Encyclopedia.