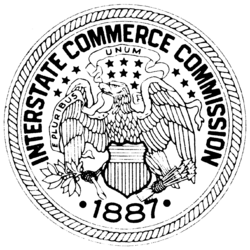 The Interstate Commerce Commission (ICC) was a regulatory agency in the United States (created by the Interstate Commerce Act of 1887). The agency's original purpose was to regulate railroads. Later the trucking industry in the United States was added. The purpose was to ensure fair rates, to eliminate rate discrimination, and to regulate other aspects of common carriers. This included public transport bus service and telephone companies. Congress expanded ICC authority to regulate other modes of commerce beginning in 1906. The agency was abolished in 1995, and its remaining functions were transferred to the Surface Transportation Board.

The Commission's five members were appointed by the President of the United States. They were confirmed by the United States Senate. The commission was authorized to investigate violations of the Act and stop any wrongdoing. However, in its early years, ICC orders required an order by a federal court to become effective. The Commission was the first Independent regulatory body. They were also the first agency to regulate big businesses in the U.S.

All content from Kiddle encyclopedia articles (including the article images and facts) can be freely used under Attribution-ShareAlike license, unless stated otherwise. Cite this article:
Interstate Commerce Commission Facts for Kids. Kiddle Encyclopedia.