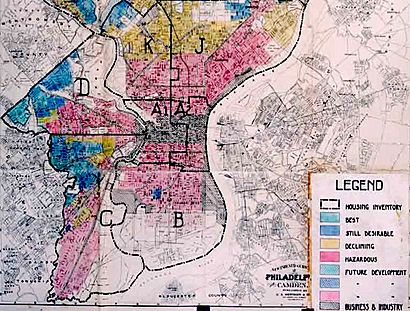 In the United States and Canada, redlining is the process of denying services to residents of specific, often racially dominant neighborhoods or communities, either directly or through the selective raising of prices. It is often seen as a modern day version of segregation.

While the best known examples of redlining have involved denial of financial services such as banking or insurance, other services such as health care (see also Race and health) or even supermarkets have been denied to residents.

All content from Kiddle encyclopedia articles (including the article images and facts) can be freely used under Attribution-ShareAlike license, unless stated otherwise. Cite this article:
Redlining Facts for Kids. Kiddle Encyclopedia.