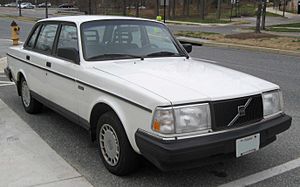 Volvo is a Swedish car and truck maker founded in 1927.

Volvo is now the leading producer in what most people would call safe family cars.

One of the Volvo's cars, the Volvo S60 is used by police departments in some parts of Europe and the United Kingdom.

In March 2010, Ford signed a deal to sell Volvo to Chinese car maker Geely for $1.8 billion.

All content from Kiddle encyclopedia articles (including the article images and facts) can be freely used under Attribution-ShareAlike license, unless stated otherwise. Cite this article:
Volvo Facts for Kids. Kiddle Encyclopedia.