Historically part of Lanarkshire, Motherwell is the headquarters for both North Lanarkshire Council, which is one of Scotland's most populous local authority areas, and of Strathclyde Police "N" division. These organisations cover an overall population of 327,000 people (59,000 in Motherwell and Wishaw) throughout the 183 square miles (470 km2) of North Lanarkshire.

The main Roman road through central Scotland ran along Motherwell’s side of the River Clyde, crossing the South Calder Water on the north west side of today’s town. At this crossing a fort and bath house were erected, but the Roman presence in Scotland did not last much later than this. There were definitely people living in the area from an early point. The name comes from an ancient religious well, the Mother's Well, dedicated to the Virgin Mary. The site of this well is now marked by a plaque on Ladywell Road. The name "Moderwelt" appears on a map of Lanarkshire made by Timothy Pont some time between 1583 and 1611 and printed in the Netherlands in around 1652.

By the start of the 19th century Motherwell was a small hamlet, a farming community of some 600 people living adjacently to the 16th century laird’s manor, Jerviston house. The hamlet remained reasonably small, reaching 1,700 people by 1841, and centred on the crossroads between the main road following the Clyde, and the road connecting Edinburgh with Hamilton and the west.

Motherwell’s fortunes changed dramatically in the second half of the 19th century. With the coming of the railway in 1848, came industry and money. By 1881 David Colville had opened both an iron and steel works; Motherwell had a new piped water supply; had been granted burgh status and had its population swelled to 13,800 people.

By the end of the 19th century Motherwell Town Hall and Dalziel High School had been built, the local football club had been founded, and its stadium, Fir Park, had been constructed.

At the start of the 20th century Motherwell stood a large and growing industrial centre, a town of 37,000 people and a wide variety of heavy industries such as munitions, trams and bridge components. By the 1930s most of Scotland’s steel production was in Motherwell, and owned by the Colville family. In 1959 the Colville family were persuaded by the government to begin work of a vast new steel works, which would become Ravenscraig. Within a few years, Ravenscraig was producing more than a million tonnes of steel per year. Following nationalisation of the steel industry, production at the plant was raised, with the Motherwell blast furnaces producing 3 million tonnes each year.

By the middle of the 1970s, Motherwell’s steel industry employed more than 13,000 people.

The 1980s brought a catastrophic collapse in the industry of Motherwell. The steel strike of 1980 lost British Steel Corporation important contracts and markets, followed by the closure of important local customers such as the Linwood car factory and Bathgate truck factory, Ravenscraig employed only 3,200 people by the end of the 1980s. Ravenscraig closed on 24 June 1992, and was demolished in July 1996, bringing 400 years of Scottish iron production to an end. Today the Dalzell Plate Mill is all that remains of Motherwell’s industrial heritage, rolling steel from Middlesbrough into steel plates of various sizes.

By the start of the 21st century Motherwell had begun to transform itself with the service industry thriving, the large scale unemployment of the previous twenty years had been largely remedied.

Motherwell hosted the National Mòd in 1983.

Strathclyde Park previously hosted the major Scottish music festival, T in the Park, until 1996, when it was moved to a disused airfield in Balado, Kinross-shire. It has also hosted other music festivals such as Retrofest. Modern authors Des McAnulty and Mark Wilson have written novels of critical acclaim which are based in the town (LIFE IS LOCAL, McAnulty) and neighbouring town Bellshill (BOBBY'S BOY, Wilson).

The town has three stations, the main railway station (known simply as Motherwell), Airbles and Shieldmuir. The main station runs on the West Coast Main Line from Glasgow to London and on the East Coast Main Line via Edinburgh and Newcastle, and is located next to Motherwell Shopping Centre. National train operators; Virgin Trains, CrossCountry and TransPennine Express, pass through the main station, but not all stop there. The station is also served by Abellio ScotRail who provide direct services to Carstairs, Coatbridge Central, Cumbernauld, Dalmuir, Edinburgh, Lanark, Milngavie and North Berwick. Virgin Trains East Coast also provide a direct daily service between London Kings Cross and Glasgow Central that stops at Motherwell. The smaller station in the Airbles suburb of Motherwell only runs on the line to Dalmuir via Glasgow Central low level and Hamilton Central; however, it is closer to the Civic Centre and Fir Park stadium than the main-line station. That station is served by Abellio ScotRail.

The (now defunct) firm of Hurst Nelson was a major railway rolling stock manufacturer based in the town. The company built trains for the London Underground, as well as main line railways.

Motherwell is very accessible, as it is right next to the M74 motorway beside the River Clyde. This road leads to Cumbria on the Anglo-Scottish border, where it becomes the M6. It is also about 3 miles (5 km) drive from the M8 motorway, between the two largest cities of Scotland, Glasgow and Edinburgh. In the future, there are plans to build a dual carriageway, that will travel through the town linking the two motorways.

There are a number of different bus companies that travel through the town to various different locations. Some examples include First, JMB Travel, Whitelaws and Coakleys.

Some of the places that can be accessible by bus from Motherwell:

The three acute hospitals in Lanarkshire can also be reached by bus from Motherwell:

Since the M74 Extension has been completed, access to Glasgow Airport has become easier. The airport is approximately 16 miles (26 km) away from Motherwell. Edinburgh Airport is further away, at 31 miles (50 km), and can be reached by the M8. 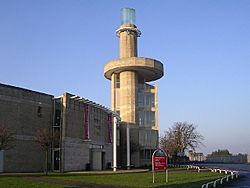 There are many places of interest that have made Motherwell a place to visit. As well as the town's Country Park, The North Lanarkshire Heritage Centre, formerly the Motherwell Heritage Centre on High Road, situated next to the town's railway station, is a building that displays the history of Motherwell from the Roman era. The building also has a viewing tower on the fifth floor, giving visitors a good view of the town and other parts of Lanarkshire, as well as of mountains as far back as Ben Lomond.

Motherwell also has a Civic Centre, situated next to the town's police station and North Lanarkshire headquarters building. A number of pantomimes and musicals have taken place in the centre's large concert hall. As well as this, the Masters Snooker has also been an event held at the Civic Centre. Renovations have been completed, and the building has now re-opened for business.

The Dalzell House is a building that is situated to the south of the town, right on the banks of the River Clyde. This house is protected as a Category-A listed building.

One of the main attractions in Motherwell is the M&D's Amusement Park, which is situated next to Strathclyde Loch in Strathclyde Park. It is now recognised as Scotland's Theme Park.

Strathclyde Country Park contains many sports and leisure facilities and also has sites for bird-watchers and anglers. As well as the M&D's theme park, there is also woodland and grass areas that are ideal for picnicking and leisurely strolls. Excavations in the park have revealed a site of archaeological interest including a Roman mosaic, Roman bath house and bridge (currently closed for health and safety reasons). Strathclyde Park is also on the site of the former mining village, Bothwellhaugh, with much of the town submerged after abandonment.

All content from Kiddle encyclopedia articles (including the article images and facts) can be freely used under Attribution-ShareAlike license, unless stated otherwise. Cite this article:
Motherwell Facts for Kids. Kiddle Encyclopedia.