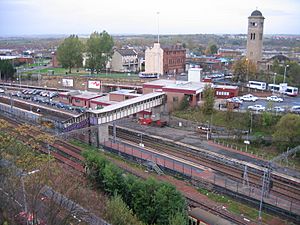 Motherwell looking from the south, with stabling sidings in the foreground. Platform 4 is closest to the camera. The bridge in the foreground has recently been replaced with a DDA compliant one.

Motherwell railway station or train station is a train station in Motherwell, Scotland. It is a big station, with four platforms, making it the biggest station in North Lanarkshire. The station can get you to big places such as London and Glasgow. There is a train every 10 minutes going to Glasgow Central station. It is managed by First ScotRail.

The station is next to the town centre, so it is easy to find.

All content from Kiddle encyclopedia articles (including the article images and facts) can be freely used under Attribution-ShareAlike license, unless stated otherwise. Cite this article:
Motherwell railway station Facts for Kids. Kiddle Encyclopedia.