Ravenscraig is an area of land in North Lanarkshire, Scotland. It used to be the site for steelworks. Ravenscraig used to have the largest steel mill in Western Europe. Ravenscraig was closed in 1992, and is now almost completely gone.

Ravenscraig is now at the start of a big redevelopment by Wilson Bowden Developments Ltd, Scottish Enterprise and Corus, to create a full new town.

Ravenscraig is very easy to get to. More than two—thirds of Scotland’s population live within 90 minutes drive.

Located in North Lanarkshire, Ravenscraig is between the towns of Wishaw and Motherwell, who house a population of over 60,000.

Ravenscraig lies only a few minutes drive from both the M74 and the M8 motorways which lead to Glasgow and Edinburgh, Scotland's two biggest cities. 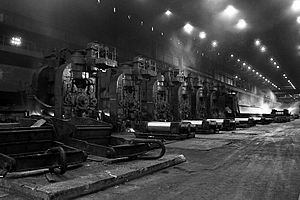 Another steel maker, Colvilles, decided to expand their business in July 1954. They were the largest steel manufacturer before World War II.

In 1954, Colvilles began the first stages of development in Ravenscraig, that turned Ravenscraig from an empty field into a site for steelworks. By 1957 most of the machinery was built and by 1959 the full building work was complete.

When Ravenscraig closed in 1993, that was the end of most steel making in Scotland. 770 jobs were lost, along with another 10,000 jobs, both directly and indirectly linked.

In its current state, Ravenscraig is one of the largest derelict sites in Europe measuring over 1125 acres in size. Ravenscraig is the same size as an area of 700 football pitches and double the size of Monaco.

After many years of planning, Ravenscraig will be rebuilt by three equal companies: Wilson Bowden Developments Ltd, Scottish Enterprise and Corus and will be one of the largest regenerations in Europe, with 400 acres being developed.

Ravenscraig will have lots of new facilities:

Part of the development will be to make new habitats for the wildlife that live in the area, such as deer, foxes, hares, otters, badgers, watervoles, butterflies and many birds. An "Ecological Clerk of Works" has been appointed to make sure the building works do not harm the wildlife.

It is hoped that the £29million sports complex will be used as a training camp for the 2012 London Olympics and the 2014 Commonwealth Games in Glasgow.

There are many people who disagree with the building work. Many local residents and small businesses think that it will take jobs and customers from other towns.

Local press have said that the Scottish Premier League football team, Motherwell Football Club could buy some land in Ravenscraig to build a new football stadium, leaving behind their home of 113 years, Fir Park. Motherwell Chairman, John Boyle has said "No decisions have been taken and we are simply exploring realistic options at this stage."

All content from Kiddle encyclopedia articles (including the article images and facts) can be freely used under Attribution-ShareAlike license, unless stated otherwise. Cite this article:
Ravenscraig Facts for Kids. Kiddle Encyclopedia.