The Argyle Line is a suburban railway located in West Central Scotland. It connects the Lanarkshire towns of Lanark, Larkhall and Motherwell to West Dunbartonshire via central Glasgow using sub-surface running. It takes its name from Glasgow's Argyle Street, under which a significant section of the line runs via a cut-and-cover tunnel. The line was developed by Strathclyde Passenger Transport Executive and British Rail.

The term "Argyle Line" is loosely used in two contexts:

The train service extends considerably beyond the Argyle Line infrastructure, connecting the suburban areas of North Clydeside with Motherwell, Larkhall and Lanark.

On Mondays to Saturdays, the off peak service each hour is:

Most services terminating at Motherwell return in the 'opposite' direction. i.e. a train from Blantyre continues via Whifflet (formerly Bellshill) and vice versa.

On Sundays, the hourly service is:

For a few years from the re-opening, the northbound West Highland sleeping car train from London Euston used the route on Saturdays only. It was detached from another portion at Mossend and diesel-hauled via the Rutherglen & Coatbridge line. 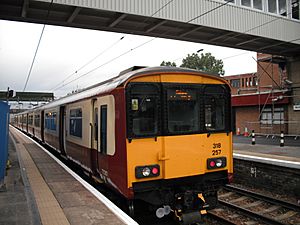 At its opening, the rolling stock on the Argyle Line was Class 314 electric multiple units, which were then new. These were accompanied by a number of the older Class 303 "Blue Train" sets from the North Clyde route. In the late 1980s and early 1990s, Class 311 trains also operated on this route. After the 303s were retired in 2002, the route was operated by a mixture of new Class 334 Alstom "Juniper" units, alongside a small number of 1980s vintage Class 318 trains cascaded from the Ayrshire routes, with the original Class 314 sets transferred to the Cathcart Circle.

The Argyle Line is operated by Class 320s and Class 318s with the occasional Class 334 appearing and Class 380 covering Lanark services that now run into Glasgow Central.

In November 1979, the Argyle Line was created, as joint venture by British Rail and the Strathclyde Passenger Transport Executive (SPTE), by reopening most of the former route. However, the former Caledonian Railway route from Whiteinch was not to be re-opened, and a new connection with the former North British Railway route via Hyndland was created, incorporating a grade-separated junction with the Queen Street Low Level route.

A key part of the re-opening was the implementation of an intensive electrically operated passenger train service between Dalmuir and Milngavie, and Motherwell and Lanark. The service west of Partick was to be integrated with the existing North Clyde services on the Queen Street Low Level line. Outside of Glasgow's central area, the train service used sections of the North Clyde and West Coast Main Line (WCML).

Two stations were constructed for the re-opening of the line:

On the central tunnel section, there are disused stations at Glasgow Green and at Glasgow Cross (adjacent to the Tollbooth), both constructed by the Glasgow Central Railway. The frontage of Glasgow Green station was demolished in March 2012, whilst the entrance to Glasgow Cross station has been turned into ventilation ducts, visible from the traffic island between Trongate and London Road.

The Larkhall Line was opened as an extension to Argyle Line services in December 2005 by First Minister Jack McConnell. The line was the reopening of the Coalburn Branch and Mid Lanark Lines of the Caledonian Railway and it begins at Haughhead Junction, just east of Hamilton Central. Stations are located at Chatelherault, Merryton and Larkhall, where services terminate. The branch is single line throughout, with a crossing loop at Allanton.

In 2006, Network Rail announced tentative proposals to electrify the Rutherglen - Whifflet section, as part of a £1.4bn upgrade to Scotland's railways (these were confirmed in May 2013). The main benefits of this scheme is to provide an enhanced frequency for the Whifflet-Central routes, reduce conflicting moves on the WCML, and to provide an electric diversionary path for long distance WCML services. Electrification also would mean the Whifflet Line being added to the Argyle Line system with services through Glasgow Central Low Level to the western suburbs. This work was completed in time for the December 2014 timetable change and led to a timetable recast that saw Whifflet Line services replace those to/from Lanark in the service pattern through the core section via Central Low Level.

All content from Kiddle encyclopedia articles (including the article images and facts) can be freely used under Attribution-ShareAlike license, unless stated otherwise. Cite this article:
Argyle Line Facts for Kids. Kiddle Encyclopedia.