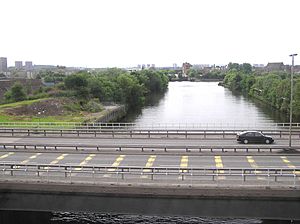 The River Kelvin (Scottish Gaelic: Abhainn Cheilbhinn) is a tributary of the River Clyde in northern and northeastern Glasgow, Scotland. It rises on the moor south east of the village of Banton, east of Kilsyth. At almost 22 miles (35 km) long, it initially flows south to Dullatur Bog where it falls into a man made trench and takes a ninety degree turn flowing west through Strathkelvin and along the northern boundary of the bog parallel with the Forth and Clyde Canal.

The famous physicist William Thomson, 1st Baron Kelvin was named Baron Kelvin in honour of his achievements, named after the river that flowed past his university.

The hydronym Kelvin is probably of Brittonic origin. It may involve *celeμïn, of which the Welsh cognate celefyn means "stem, stalk", or else the zero-grade of the Indo European root of that element *kḷh1-, "rise up".

The river's first important (and considerably larger) confluence is with the Chantyclear Burn which originates from the ridge of Dullatur. It then continues its westward flow being joined by the often depleted (due to water being diverted to the canal) Shawend Burn to the west of Craigmarloch bridge. The next important tributary is the Garrel at a point south-east of Kilsyth south of Dumbreck Marsh. The Kelvin then passes through the large flood plain north of Twechar where it is fed by the Dock Water, Queenzie Burn, the Cast Burn and the Board Burn before reaching Kirkintilloch at its confluence with the more substantial waters of the Glazert and Luggie. It then flows past Torrance, meanders through Balmore Haughs, to the south of Bardowie where it joins the Allander Water, after which it takes a south-westerly direction towards Maryhill, Hillhead, through Kelvingrove Park before falling into the River Clyde at Yorkhill Basin in the city of Glasgow.

Successive attempts at improving the quality of the water have been rewarded by the return of salmon. The river has always been home to brown trout and both species can be fished by obtaining the relevant permits.

Bridges over the Kelvin 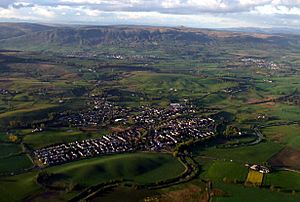 Torrance Bridge over the River Kelvin in the foreground with Milton of Campsie and Lennoxtown in the background.

The Kelvin is bridged at several points throughout Glasgow. Most notable is the Great Western Bridge on Great Western Road in the city's West End. Below this bridge is an underground station that bears the name Kelvinbridge, a name commonly attached to the area. Other bridges include the one near the Antonine Wall at Balmuildy, Partick Bridge on Dumbarton Road, the bridge at Queen Margaret Drive, Ha'penny Bridge and several in the grounds of Kelvingrove Park.

The Kelvin Aqueduct carries the Forth and Clyde Canal over the river. It was Britain's largest when it was opened. The river is used as an overflow for the canal.

All content from Kiddle encyclopedia articles (including the article images and facts) can be freely used under Attribution-ShareAlike license, unless stated otherwise. Cite this article:
River Kelvin Facts for Kids. Kiddle Encyclopedia.