Kirkintilloch (/ˌkɜːrkᵻnˈtɪləx/; Scottish Gaelic: Cair Cheann Tulaich) is a town and former royal burgh in East Dunbartonshire, Scotland. It lies on the Forth and Clyde Canal, about 8 miles (13 km) northeast of central Glasgow. Historically part of Dunbartonshire, the town is the administrative centre of the East Dunbartonshire council area, and its population in 2009 was estimated at 19,700. 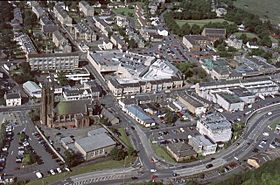 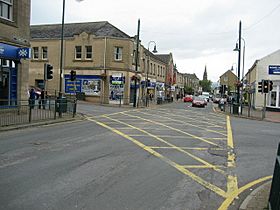 "Kirkintilloch" comes from the Gaelic Cair Ceann Tulaich or Cathair Cheann Tulaich, meaning "fort at the end of the hill". This, in turn, may come from a Cumbric name, Caer-pen-taloch, which has the same meaning. A possible reference to the site is made in the 9th century Welsh text Historia Brittonum, in which the Antonine Wall is said to end at 'Caerpentaloch'. The fort referred to is the former Roman settlement on the wall and the hillock is the volcanic drumlin which would have offered a strategic viewpoint for miles to the West, North and East. The etymology is sometimes taken literally as "Kirk in tilloch" ("church in the field"). Its long name is often shortened by locals to the colloquial Kirkie or Kirky, as reflected in a number of business names in the town.

The first known settlement on the site of what is now Kirkintilloch was of Roman origin, a fort established in what is now the Peel Park area of the town in the mid-2nd century, one of the northernmost posts in Roman Britannia. Through it the Antonine Wall was routed; its course continues through the centre of the town to this day, although little trace can now be seen above ground. There are many archeological artifacts found in Kirkintilloch on display at the Hunterian Museum in Glasgow. There is no strong evidence of habitation on the site for the following thousand years until Clan Cumming established a castle (Motte and Bailey) and church there in the 12th century. A small settlement grew and was granted burgh status in 1211, becoming an important staging post for west-east journeys from Glasgow to eastern and north-eastern Scotland. From this time, a weekly market was held in the town, probably at the foot of Peel Brae (along with High Street and Cowgate, one of the three medieval thoroughfares in the town). The castle was of some importance during the wars of independence when an English garrison was stationed there, commanded by Sir Philip de Moubray, who was later to command Stirling Castle at the time of the Battle of Bannockburn. Soldiers from the castle were dispatched to arrest William Wallace at Robroyston in 1305 and escorted him to Dumbarton Castle. Later the same year, the garrison is recorded as having sent a petition to King Edward of England complaining of non-payment of wages. The castle was attacked by Scottish forces in 1306 under Bishop Wishart of Glasgow (using timber given to Glasgow diocese by the English for cathedral repairs), but the siege was unsuccessful. The castle is thought to have been destroyed on the orders of Robert Bruce later in the conflict, although the traces of a mot surrounded by a ditch can still be seen in the Peel Park.

The original Cumming parish church, St Ninian's, was constructed around 1140 some distance to the east of the town (where some of the stones remain in the form of an 18th-century watchtower at the entrance to the Auld Aisle Cemetery) as Kirkintilloch was originally in the parish of Lenzie which stretched from Cumbernauld in the East to Kirkintilloch in the West. The establishment was part of the endowment of Cambuskenneth Abbey, and was accompanied by a grant of one oxgang of land (approximately 15 acres), the measurement that lent its name to the area near the church. A chapel to the Virgin Mary was established in the town itself, sometime before 1379, and was endowed with land at Duntiblae by Sir David Fleming. The move of the parish church to the site of the chapel at Kirkintilloch Cross (now the Auld Kirk Museum) in 1644 resulted in a split of the Parish into Easter and Wester Lenzie (later Cumbernauld and Kirkintilloch Parishes) The name Lenzie was later reused for Kirkintilloch's railway station on the main Glasgow to Edinburgh line, around which the later village of that name developed.

On 3 January 1746, the retreating Jacobite army of Charles Stuart made its way through Kirkintilloch, on its way back from Derby, and on the march to Falkirk and ultimately Culloden. One of the Highland army's stragglers was shot dead at the town cross by a man hidden in a barn at the Kiln Close (where the library now stands). On hearing of the murder, Charles halted his army on the Kilsyth road and threatened to turn back and burn the town. The town magistrates persuaded him to continue marching, in return for an unspecified payment, and the town was spared.

The town was one of the hotbeds of the Industrial Revolution in Scotland, beginning with the emergence of a booming textile industry in the area. There were 185 weavers in Kirkintilloch by 1790, and in 1867 James Slimon's cotton mill at Kelvinside employed 200 women. With the construction of the Forth and Clyde Canal through the town in 1773, and the establishment of the Monkland and Kirkintilloch Railway in 1826, Kirkintilloch developed further as an important transportation hub, inland port and production centre for iron, coal, nickel and even small ships. This industrial heritage lives on in the town's designation as the "Canal Capital of Scotland", and in the redevelopment of the canal and surrounding former industrial sites in the early 21st century.

By the 20th century, the principal employers in the town were the shipbuilders J & J Hay and Peter McGregor, and the Lion (1880–1984) and Star foundries, all of which produced goods for the domestic market and for export around the world. Kirkintilloch's most famous exports were the distinctive red British postboxes and phoneboxes K2 to K6, produced in the town until 1984 and still to be found as far afield as Taiwan and Mississippi. Listed versions of these boxes still stand at the foot of Alexandra Street in the centre of Kirkintilloch.

Kirkintilloch was a "dry town" for much of its recent history, with the sale of alcohol on public premises banned from 1923 until 1967. The prohibition on the sale of alcohol had long been demanded by the Liberal Party and the temperance movement, both of which had a strong influence in the town in the early part of the 20th century, largely due to the perceived negative effects of alcohol on the town's inhabitants.

The 1960s development plan to redevelop inner city areas of Glasgow saw Kirkintilloch used as an overspill settlement for relocated Glaswegians in combination with the new towns of Livingston and Cumbernauld, offering employment in housebuilding and an increase to the local population to its current levels. Large numbers of new houses for owner occupation have been built since that time.

Kirkintilloch Town Hall was opened in 1906, paid for by public subscription. Listed as a building of special architectural or historic interest, it was closed by East Dunbartonshire Council in June 2004, largely due to the anticipated expense of restoring a building constructed of notoriously crumbling soft sandstone. In response the Kirkintilloch Town Hall Preservation Trust was established as a registered charity to preserve the hall and restore it for community use. Work began on the redevelopment of the hall in early summer 2016, with work planned to finish on a new community hub in summer 2017.

The town is served by the William Patrick Library, which moved from a converted private villa near Peel Park to a new building on West High Street in the 1990s. The titular William Patrick was a local minister whose brother donated funds to the local people to have a library founded in William's name. The neglected old library was sold by the council back into private ownership and returned to residential use after restoration works. William Patrick Library is the main library for East Dunbartonshire Council and also houses the reference department and other council offices including social services, planning and a new community hub.

Kirkintilloch underwent significant population growth in the post-Second World War period, with several new amenities erected to cater for the growing population of the town and its surrounding villages. New shopping facilities were built in the Cowgate and Townhead areas, culminating in the opening, by Diana, Princess of Wales, of the Regent Centre shopping mall in the 1990s.

The local swimming pool and Community Education Centre, built in the 1960s and '70s in Woodhead Park to the south of the town, were demolished in 1999 and 2005 respectively. Woodhead Park was once home to a petting zoo, bandstand, greenhouses, putting green and public toilets. All are now closed, although a new leisure centre was opened on the same spot as the old pool in July 2007, providing facilities for tennis, badminton, swimming, football and a gymnasium. A large new children's play area has been created near the site of the former putting green in the park.

The construction of the new leisure centre came in combination with a wider-ranging artistic, cultural and social regeneration project called Kirkintilloch's Initiative. This includes the new link road largely funded by housebuilders developing on the site of the former Woodilee Hospital.

Kirkintilloch Learning Centre is located on Southbank Road, overlooking the Forth and Clyde Canal, an offshoot of Cumbernauld College.

Locally, a G66+ Live! Cultural festival offers a wide range of events from talks on history in local churches to musical events in the town's local bars, such as Bar Bliss, dramas and also entries from the schools in the G66 postcode area. G66+ Live! is annual festival taking place in June. Kirkintilloch's most successful musical ensemble is its brass band, the Kirkintilloch Band, who were crowned Scottish Brass Band Champions in 2007 and who have had success in competitions both in Scotland and further afield. Each August the local Canal Festival takes place.

An amateur theatre group, the Kirkintilloch Players, is based at the Turret Theatre in the Eastside area of Kirkintilloch, the former home of the town's Liberal Club.

The town has a pipe band of the same name, Kirkintilloch Pipe Band. Established on 12 November 1888 it is one of, if not the oldest civilian pipe band in the world. The band takes part in civic and private events in the local and surrounding areas and also takes part in competition. Its pipers and drummers are mostly from the local area and the band still practices weekly in the Hillhead Community Centre.

The town has a variety of eateries, bars and nightspots. The Kirky Puffer beat local rival bar the Antonine (now closed) to pub of the year in January 2006 and this is an accolade that the Puffer has been able to win year after year. Local nightclubs Club Bliss (formerly Babylon then Tantra) and Smith's Hotel (formerly Broadcroft Hotel) have been threatened with closure and have been forced into investing heavily in security and local alcohol awareness initiatives to help to discourage anti-social behaviour.

All content from Kiddle encyclopedia articles (including the article images and facts) can be freely used under Attribution-ShareAlike license, unless stated otherwise. Cite this article:
Kirkintilloch Facts for Kids. Kiddle Encyclopedia.