Kids Encyclopedia Facts
This article is about the European species. For the Asian species, see Siberian roe deer. 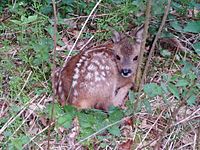 Range of the European roe deer

The roe deer or (Capreolus capreolus) is a deer species of Europe and Asia Minor. It is also called European roe deer to not confuse it with the related Asian species, the Siberian roe deer (Capreolus pygargus).

The roe deer is a smaller deer. In the summer its fur is reddish-brown, in the winter it is greyish brown or dark brown. Fawns have a reddish-brown fur, with white spots on their back and sides.

Male roe deer have antlers, which are small compared to other deer species. The antlers can become up to 20-25 cm (8-10 in) long, with two or three (rarely four) points.

The roe deer lives in Europe, Asia Minor, and the coastal regions of the Caspian Sea.

Roe deer mate during July and August. After 10 months the female gives birth to 1-3 (usually 2) fawns, usually in May/June. They become mature when they are 1 1/2 year old. Roe deer can live up to 10-12 years in the wild, in captivity up to 17 years.

All content from Kiddle encyclopedia articles (including the article images and facts) can be freely used under Attribution-ShareAlike license, unless stated otherwise. Cite this article:
Roe deer Facts for Kids. Kiddle Encyclopedia.