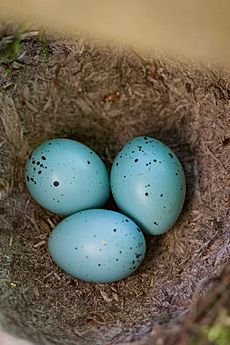 Three eggs in a nest 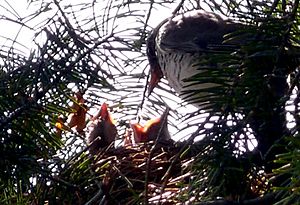 Adult and chicks in the nest 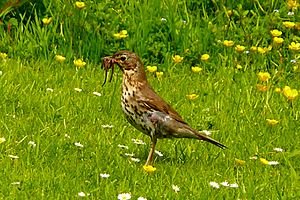 With a beak full of earthworms. 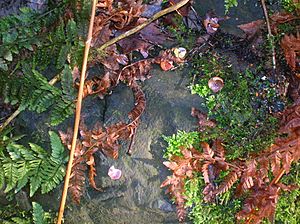 Grove snails on an 'anvil'

The song thrush (usually thrush, Turdus philomelos) is a member of the passerine songbird family Turdidae. It breeds across much of Eurasia. It is also known in English dialects as throstle or mavis. The song thrush has brown upperparts and black-spotted cream or buff underparts, and has three recognised subspecies. Its distinctive song, which has repeated musical phrases, has frequently been referred to in poetry.

The song thrush breeds in forests, gardens and parks, and is partially migratory with many birds wintering in southern Europe, North Africa and the Middle East; it has also been introduced into New Zealand and Australia. Although it is not threatened globally, there have been serious population declines in parts of Europe, probably due to changes in farming practices.

The thrush builds a neat mud-lined cup nest in a bush or tree and lays four or five dark-spotted blue eggs. It is omnivorous and has the habit of using a favourite stone as an "anvil" on which to smash snails. Like other perching birds (passerines), it is affected by external and internal parasites and is vulnerable to predation by cats and birds of prey.

The female song thrush builds a neat cup-shaped nest lined with mud and dry grass in a bush, tree or creeper, or, in the case of the Hebridean subspecies, on the ground. She lays four or five bright glossy blue eggs which are lightly spotted with black or purple. Two or three broods in a year is normal, although only one may be raised in the north of the range. On average, 54.6% of British juveniles survive the first year of life, and the adult annual survival rate is 62.2%. The typical lifespan is three years, but the maximum recorded age is 10 years 8 months.

The thrush is occasionally a host of parasitic cuckoos, but this is rare because the thrush usually recognizes the cuckoo's eggs. However, the thrush does not act with the same aggression towards the adult cuckoo as does the blackbird. The introduced birds in New Zealand, where the cuckoo does not occur, still have the ability to recognise and reject non-mimetic eggs.

The song thrush is omnivorous, eating a wide range of invertebrates, especially earthworms and snails, as well as soft fruit and berries. Like its relative, the blackbird, the thrush finds prey by sight, has a run-and-stop hunting technique on open ground, and will rummage through leaf-litter seeking food.

Snails are especially important when drought or hard weather makes it difficult to find other food. The thrush often uses a favourite stone as an "anvil" on which to smash the snail before extracting the soft body and invariably wiping it on the ground before eating it. Young birds initially flick objects and attempt to play with them until they learn to use anvils as tools to smash snails. The nestlings are mainly fed on animal food such as worms, slugs, snails and insect larvae.

All content from Kiddle encyclopedia articles (including the article images and facts) can be freely used under Attribution-ShareAlike license, unless stated otherwise. Cite this article:
Song thrush Facts for Kids. Kiddle Encyclopedia.